If you intend to build your upper body pulling strength, you will have to rely on performing chin-ups and/or pull-ups. Their executions are a bit different from each other but their effectiveness in promoting strength and hypertrophy gains is unparalleled.

We are sure that many of you must have noticed that performing pull-ups tend to be harder than performing chin-ups. Well, that’s why fitness coaches often ask their clients to get stronger on chin-ups first and then switch to pull-ups.

Why is that so? To answer that question, here in this article we are going to throw light on the reasons that make pull-ups harder than chin-ups. Let’s get started.

Are pull-ups or chin-ups harder?

If you list all the bodyweight exercises on the basis of their difficulty levels, pull-ups, and chin-ups will acquire the top position. This is because when you pull yourself vertically upwards while performing a pull-up or chin-up, the entire weight of your body is lifted by your arms and shoulders.

However, performing pull-ups is harder than performing chin-ups. This is owing to the reason that the pulling motion of chin-ups has an active involvement of the biceps. But that is certainly not the case with pull-ups because it isolates the lats in its execution.

Why are pull-ups harder than chin-ups? 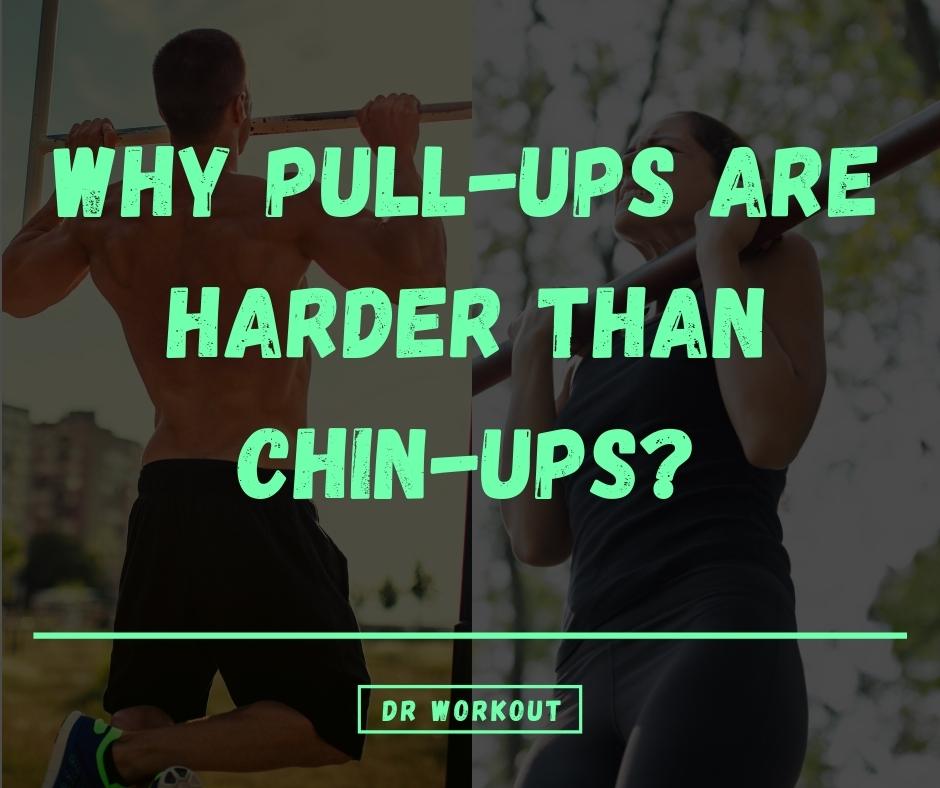 No matter what your strength levels are, you will always find performing pull-ups harder than performing chin-ups. There are certain reasons behind it. Let’s have a look at them:-

This has to be the very first reason explaining why pull-ups are harder than chin-ups. When you perform a regular chin-up your biceps significantly get involved in its execution. Owing to this reason, chin-ups are often regarded as the only compound exercise that can add inches to one’s biceps.

No matter whether you are performing a chin-up for back development or bicep development, your biceps will definitely get trained with it. However, that is certainly not the case when you perform a pull-up.

The execution of a strict pull-up has little to no bicep involvement. Hence, when you perform a pullup, there are just a few muscles that assist you in vertically pulling yourself up. On the contrary, performing a chin-up incorporates more muscles as compared to a pull-up.

That is why beginners who are just getting started with their weight training journey are recommended to get stronger on chin-ups first. Doing so will provide their pulling muscles with a firm foundation that will enable them to do pull-ups with the correct form and technique.

When you perform a chin-up, you keep your hands shoulder-width apart with your palms turned inward. In some cases, people also like to perform chin-ups keeping their arms narrower than their shoulder width. Such hand placements contract your body and hence it becomes easier for you to pull your body weight up.

On the contrary, when you perform a regular pull-up, your hands are placed wider than your shoulder width. Most lifters even place their hands as wide as possible. This further expands your body and pulling your body upwards becomes extremely challenging.

However, if you have mastered the chin-up, performing pull-ups would be a lot easier for you, even if you choose to perform them with super-wide hand placement.

The strength of one’s latissimus dorsi muscles plays a crucial role when it comes to performing strict pull-ups. This is because when you perform pull-ups, its execution isolates your lats. If you have weak and underdeveloped lats, then forget about hitting some impressive numbers on the pullups.

To perform strict pull-ups, your lats need to get strengthened first. And chin-ups serve that purpose quite well. As we mentioned before while performing a chin-up your upper body is in a contracted state, which makes it easier for you to pull yourself up.

Moreover, the involvement of the biceps in the execution of a chin-up makes it far easier to perform as compared to a pull-up.

So if your lats lack the strength required to hit strict pull-ups, choose to perform chin-ups to train and strengthen your lats. Once you are able to hit around 10-12 reps with perfect form and technique on the chin-up, you will surely experience some noticeable gains in your pull-up performance.

When you perform any exercise that involves pulling your body weight against gravity, your forearm strength plays a crucial role in its execution. So whether you are performing a chin-up, a pull-up, or climbing a rope, your forearms will automatically get involved in the movement.

However, when you perform a chin-up, it incorporates a limited amount of your forearm strength. This is because your biceps assist primarily while executing a chin-up. This in turn minimizes the load on your forearms.

On the contrary, when you perform a pull-up, its execution engages the muscles in your forearms. So if your forearm strength is mediocre, performing pull-ups would be challenging for you.

Thus, pull-ups tend to be harder than chin-ups especially if you lack forearm strength.

The strength and stabilization of your core muscles are of utmost importance when it comes to performing numerous compound exercises. Chin-ups and pull-ups are no different in this regard.

However, when you perform a chin-up, your body doesn’t have to rely excessively on your core strength and stability.

On the contrary, when it comes to performing a strict pull up you need to engage your core as much as possible. Doing so restricts your body from oscillating to and fro. A strong and stable core also plugs in the energy leaks that often inhibit your pull-up performance.

Even though the execution of both a pull-up and a chin-up requires you to engage the core muscles, the degree of core engagement is greater in performing pull-ups.

We are sure that by now you would have got enough reasons explaining why pull-ups are harder than chin-ups. Nevertheless, an ideal workout program would include both of them. They are one of the most fundamental compound movements for targeting your back muscles. So if you want a wide and well-developed back make sure to include them in your back training routine.

If you can neither perform a pull-up nor a chin-up, then switch to exercises like inverted rows and lat pulldowns (with a supinated grip). Those exercises will enable you to build up the foundational strength that you will require to vertically pull yourself up a bar.