If you have seen cyclists, you must be acquainted with their lean bodies. They are known for their lean physique, and leg muscles which are very well-built. However, you must also have noticed that the upper part of their bodies is not as well built as their lower bodies.

Athletes involved in different kinds of sports have a few features in common. For instance, swimmers are tall, have long limbs, broad shoulders, and narrow abdomen. Similarly, the majority of the cyclists that you come across will have narrow backs and flat chests. However, if there is some body part of a cyclist that receives the most attention, it is the skinny cyclist arms.

This is because the jersey doesn’t completely cover the arms. Have you ever wondered why a cyclist’s arms so small?

Sometimes, the upper bodies of cyclists are so underdeveloped that ordinary people, or people who do not train regularly, are left to wonder- what causes the arms of cyclists to become so skinny? This article will give you an idea about the thin build of cyclists’ arms. 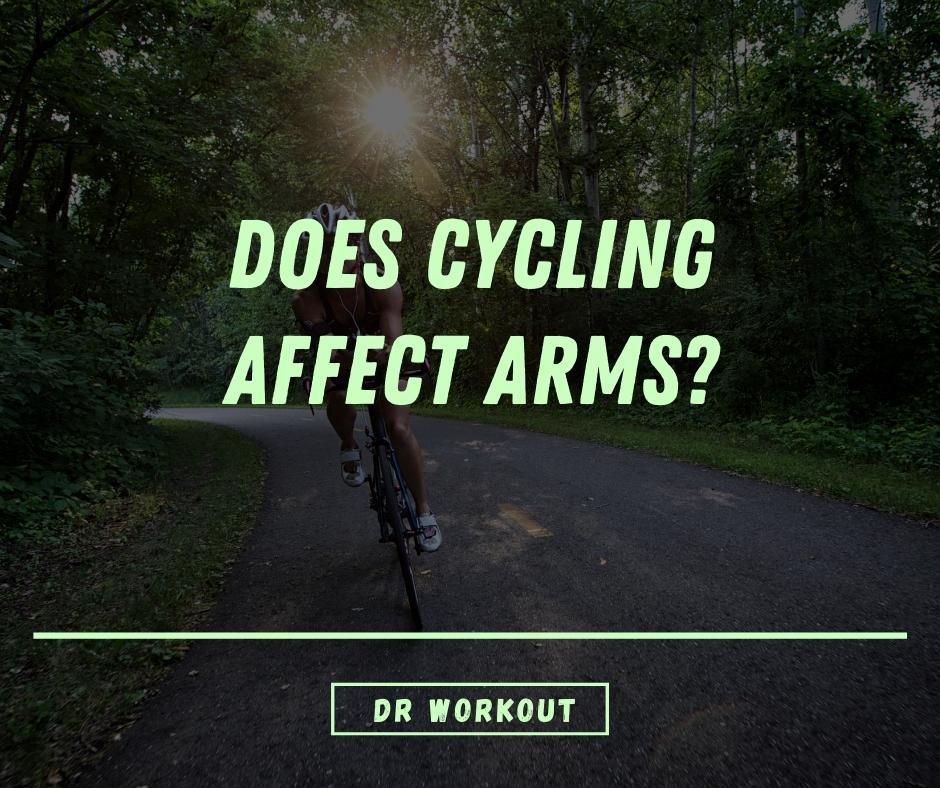 No, cycling has no direct link with the arms of a cyclist. If you are still wondering why small arms are a common trait among cyclists, it is because when you are cycling, you do not put your triceps and biceps to use. Not only this, but lower weight also enables the cyclist to deliver optimal performance.

When you ride a bike, you grip the handlebars to provide support to the upper region of the body. This has an effect that is equivalent to using spring clamps for toning the forearm muscles.

Supporting the body weight for long periods of time has an effect that is similar to holding the pose of an isometric push-up. Hence, they target the muscles that make up the shoulders and the upper arms.

Although cycling moves all the body muscles, it is the hips and the legs which do most of the work and have to be strengthened to allow the cyclist to move forward. The only function of the upper body is to act as a point of stabilization.

Since not much attention is paid to the upper body while cycling, the upper body growth of the cyclists usually remains poor. If a cyclist wishes to develop his upper body and arms, he will have to resort to resistance training and exercises that will particularly target his arms and other muscles of the upper body. 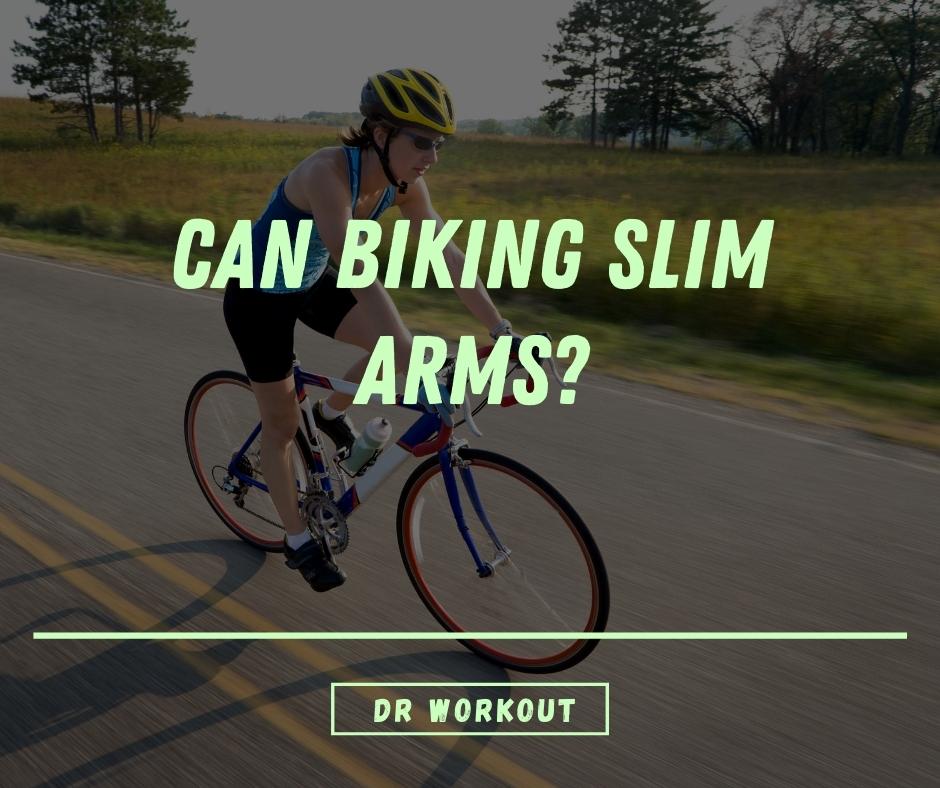 No, biking cannot make the arm grow small. However, it can contribute greatly to tone the arms. When a cyclist applies force on your bicycle bars in order to pull on them and counter the downward pull, it is this movement that helps to tone the deltoids, triceps, and the biceps. Cycling in the hilly areas is far more beneficial than cycling on smoother grounds. They can reap better benefits.

Cycling does not require much involvement of the upper body. Your arms do not undergo tremendous movement; therefore, there is no possibility as to why you will shed fat from your arms. When you cycle, your upper body aids in maintaining posture and retaining balance. In the case of road biking, the catch is to maintain an invariable position for longer periods of time. This aids in building a better upper body shape and facilitates muscle toning.

Also, it is important to note that there is no such thing as spot reduction. When you lose weight, you lose weight from all over your body as a unit; not just your arms. Therefore, it would be wrong to say that biking can slim the arms. Nevertheless, you cannot also ignore the fact that cycling can help you have toned arm muscles.

Why do cyclists have skinny arms? 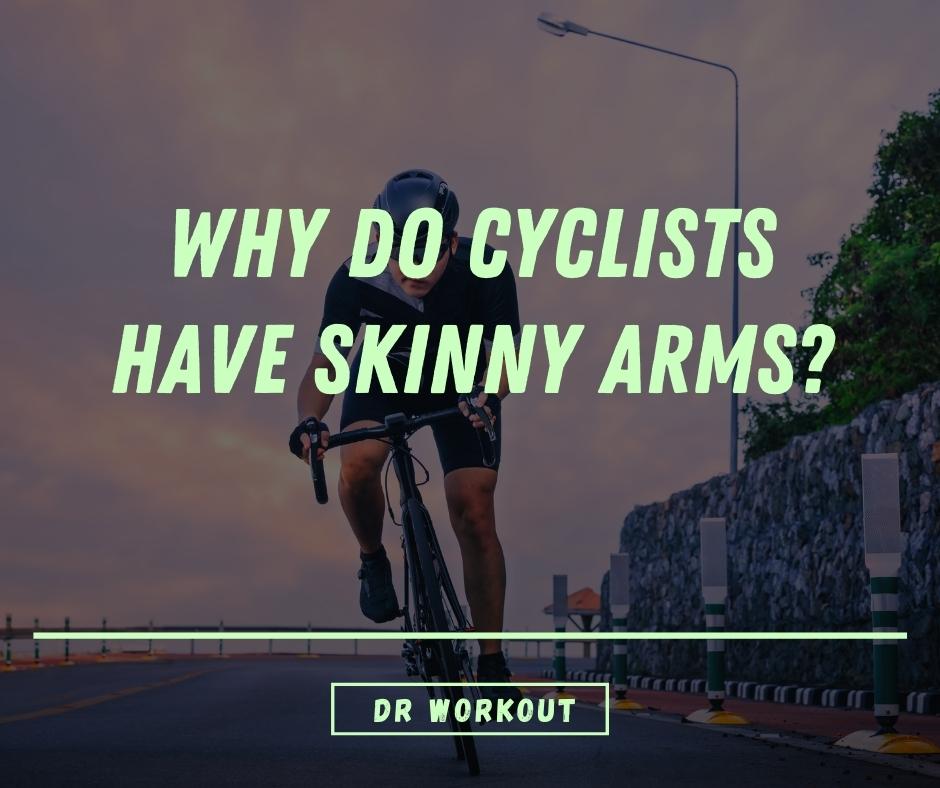 There are a number of reasons that are accountable for the slim arms of cyclists. It may be due to their activity status, their strict diet plan, the exercise routine they follow, or due to the low utility of their upper bodies. Stated below are some reasons that will justify why cyclists have small arms.

When a cyclist gets into the action, it propels the burning of fat. This is because right from the moment that the cyclist starts pedaling, the body slips into a state of motion. In the case of cyclists, the lower body performs more efficiently as compared to the upper body. The internal organs work very efficiently. All of them work in coordination with one another and act on the body, causing the cyclists to appear lean and have skinny biceps.

For the cyclists who are involved in long-distance cycling, it is their efficiency that does the magic. Since cyclists live a very active lifestyle, they can burn fats in each and every ride. Hence, they tend to appear skinny.

The upper body of cyclists is not much involved in cycling

Professional cyclists do not have to count on the strength of the upper body for anything apart from holding their bodies upright during cycling. Therefore, they do not lay much emphasis on developing those muscles. If a cyclist develops a buff and muscular upper body, it will only add to the weight of the cyclist and offer resistance when he will dash through the wind.

Having small arms automatically solves the problem and helps the cyclists to cut through the wind at a jet speed. When you avoid the development of unnecessary muscles, you can remain efficient and light. Cycling is a sport that doesn’t need much strength in the upper body. Therefore, it is an ideal solution to sacrifice the muscles of the arm, back muscles, and chest in order to boost performance.

Having excessive muscles in the body can take a toll on endurance. More the muscle you carry in your body, you will require more oxygen to handle the effort output. When you minimize the muscles in your upper body, you automatically slash down that possibility and your body does not realize the need for excess oxygen.

Cyclists do not spend time training their arms. If a cyclist wants to excel in his sport, he does not have to lift weight and train his arms. On the other hand, if he wants to excel in uphill cycling, massive biceps and wide backs can prove to be beneficial.

The main purpose that the upper body of cyclists serves is that it helps to have a better balance while riding and also prevents injuries. Some ways in which cyclists can benefit from having small arms and small upper bodies is that they help to reduce the weight of the cyclists, eliminate the drag, and also provide more endurance so that the cyclist can remain on the seat for long hours.

Despite the fact that cycling can target some specific muscle groups, he can stray away from being muscular if he indulges in intense training, adjusts the number of cardio hours, and restricts his diet.

The diet of a cyclist also plays an important role in determining his arm and upper body size. Professional cyclists usually spend a lot of time training on their bikes. Some of the training sessions can last for hours. Cyclists maintain a catabolic diet that keeps them from gathering muscle mass. They do not give into consuming food that has high-calorie contents.

If a cyclist does not consume calories and protein, there is no way that they will be able to put on muscles. Therefore, this is another factor that might be contributing to the lean body and small arms of cyclists.

Heredity is also an important factor to consider

You must have seen that people involved in a particular kind of sport have a distinct kind of physique. While training and diet play an important role, it also matters how an individual is genetically oriented.

Genetics is an important factor that determines the physical attributes of an individual. Some cyclists are naturally skinny due to their physical form. Although training and proper diet are the key instruments in making a cyclist skinny, the heredity of the individual is also important to consider.

If your genes do not permit you to grow muscles, no amount of training and no quantity of food can help. Some cyclists may have skinny arms and lean bodies solely because they are predisposed to be lean and skinny.

Therefore, it is important to understand that cycling has nothing to do with making your arms skinny. However, cycling can definitely tone your arms. If you are fond of extreme riding and you practice bar-hops, the movements are likely to tone the muscles that are present in your upper arms, forearms, and shoulders.

As has been seen throughout the article, there are a number of logical explanations that will justify the skinny arms of cyclists. It is the strict diet plan, less attention to the upper arm during cycling, and long sessions of activities that make a cyclist’s arms so skinny. It may be a little astonishing for those who are not into cycling, but that is how the sport works.

Therefore, if you do not want your arms so small, you might have to put in some extra effort. You will also have to add adequate quantities of protein to your diet to allow the growth of the muscles. Hope this gives you a complete idea about the secret to skinny cyclist arms.

To sum things up, it is the low utility of the upper body, diet plan of a cyclist, and proper training that helps the cyclists to keep their upper body and arms small and lean!