This might have happened to you a lot of times – you are at the gym, planning to complete your workout quickly, and to go home as soon as possible.

But the gym is so crowded, and you are the Nth person in the queue to do the bench press!

This happens to everyone, and it’s a hard truth that the gym can sometimes get too crowded. But is the gym rush actually avoidable? Well, yes is my answer.

The very first thing you need to learn in order to avoid gym rush, is to understand what all are the busiest gym times, and when all are the gym least crowded. 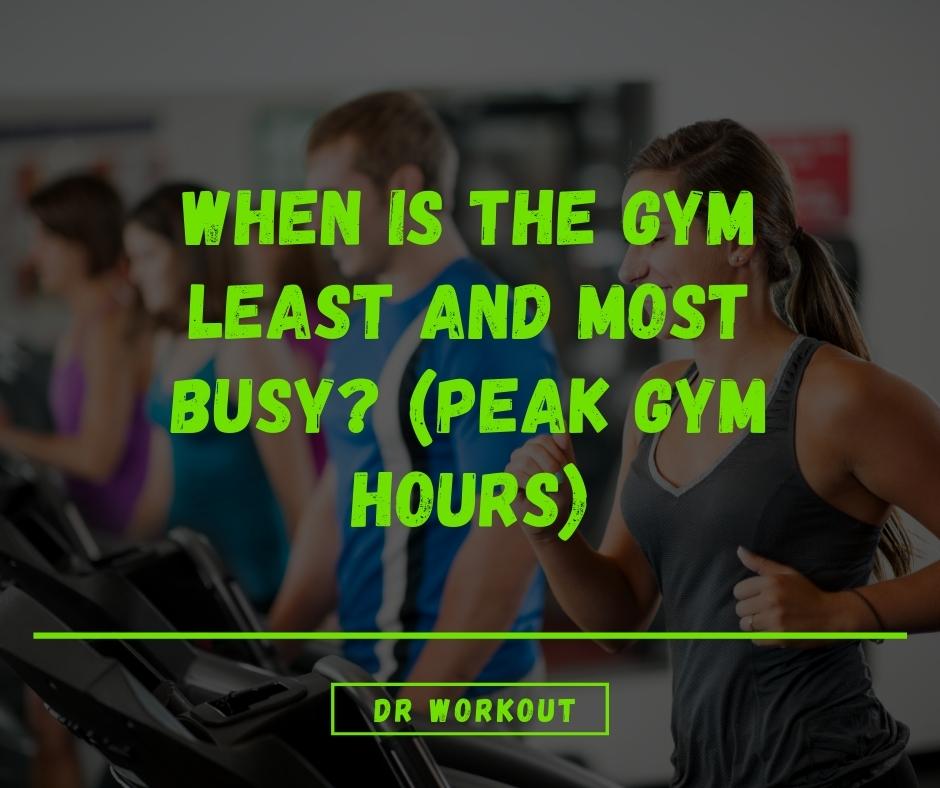 Once you understand that, you can plan your workout schedule accordingly and work out peacefully.

Through this article, we will help you learn when the gym is most busy, as well as when it is less crowded.

When Is The Gym Least Busy? 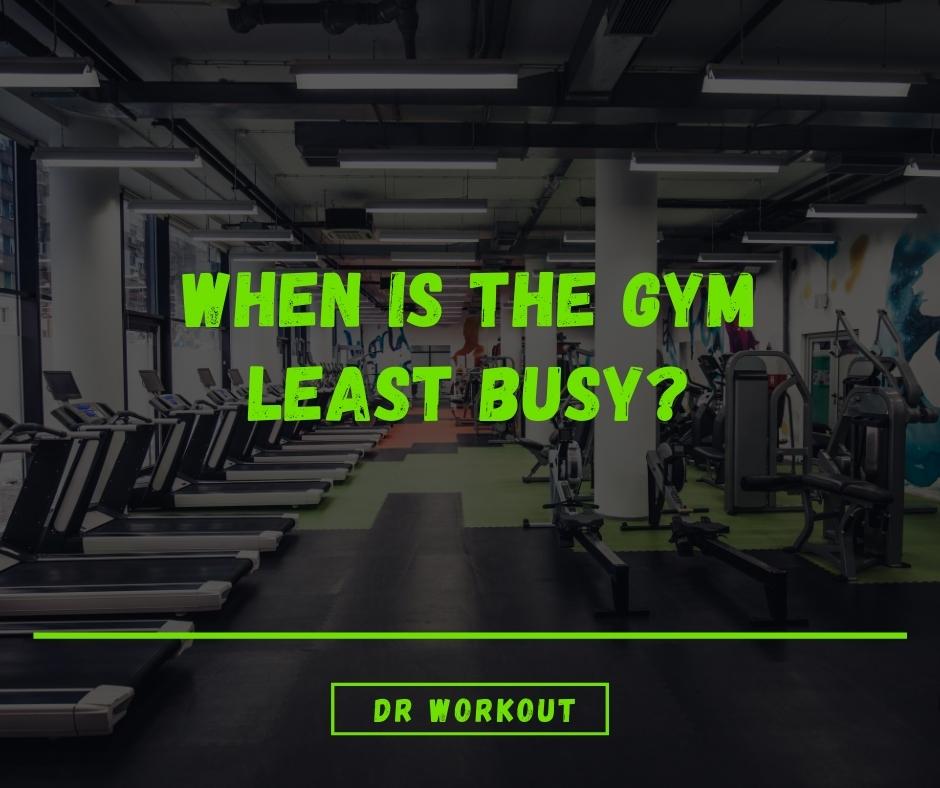 In most of the gyms, the least busy times of the day are early mornings, noons, as well as late evenings. These are the times when the majority of the members won’t be hitting the gym, thanks to work or college.

But all that being said, the least busy gym times also depend on the location or in other words, what types of people are the majority of its members.

Leaving behind all those exceptions,  given below are when most gyms are usually least busy:

Most gyms would open by around 4:30 in the morning (unless it is a 24-hour gym). After that time, it might take more than a couple of hours to see the real rush.

So, the time between 4.30 AM and 7 AM is usually the least busy gym hours in most clubs. Often, people following a strict lifestyle work out in the early mornings to kick start their day.

By later mornings, we here refer to the time after 9.30 AM. By this time, morning gym goers would have headed back home to go to work or college.

If you can hit the gym by this time, you will have to face a small crowd, and work out comfortably.

But the catch here is that if you follow a normal lifestyle, hitting the gym after 9 O’clock in the morning might not be possible. But if you have a flexible job or a comparatively freer lifestyle, late mornings are great times to work out.

For instance, if you are a housewife, hitting the gym after 9 when your kids and partner have headed for school or work, is a great idea!

Gyms become even more free on noons. The time between 12 mid-afternoon and four in the evening, is an empty time at most gyms. This is also the time some professional bodybuilders would hit the gym, to work out in their own world!

There’s also a crazy idea if you are working a regular job – to hit the gym at lunchtime! If you have a gym very close to your office and can also find a facility to take showers and change clothes, this can also work for you.

Late in the night

After nine in the evening, most people would head back to their homes. This is also a great time to work out in a less crowded atmosphere.

Also, some gyms might be open 24 hours and in such cases, the club will be less crowded through to the next morning.

But a catch here is that if the gym is located near a college, nighttime can be a little bit busier compared to a regular location.

If you ask when gyms are least busy no matter where they are located, one obvious answer is Sundays. Except for real professional lifters or those with unusual motivation (for whatever reason), Sundays are usually off days for most gym-goers.

But a question that definitely arises is, would you too hit the gym on Sundays instead of going out, visiting the church or any holy place, or simply relaxing at home?

What’s The Best Time To Go To The Gym To Avoid Crowds? 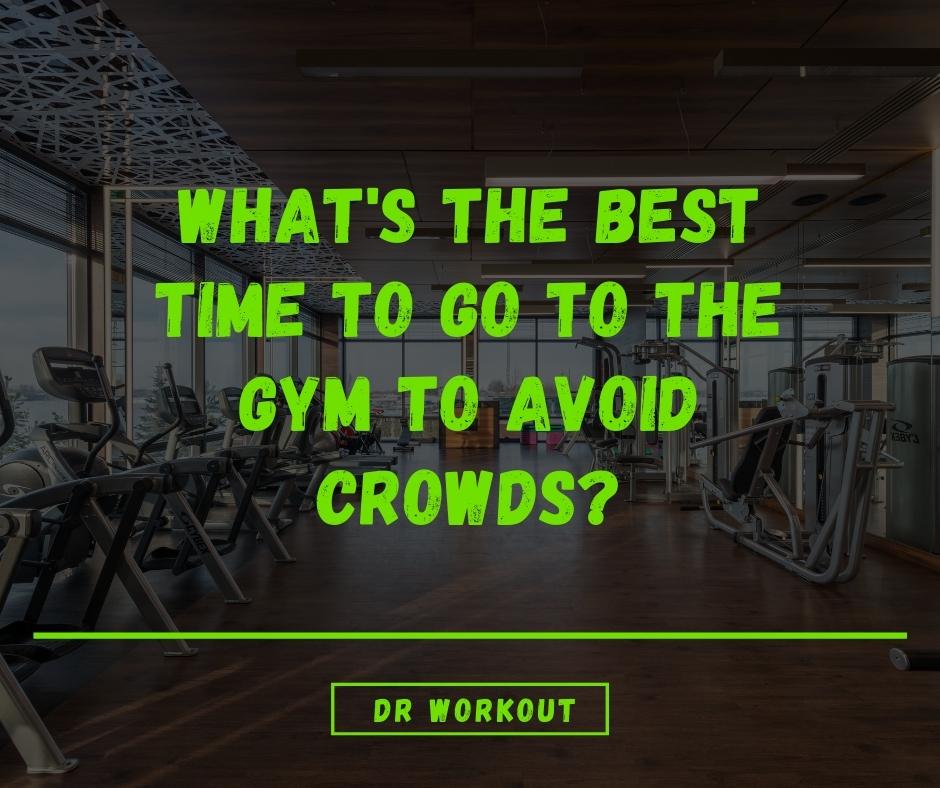 Well, the exact answer to the question also depends on where the gym is located.

If it is a normal area where most people are doing a 9-5 job, hitting the gym at the following times of the day will help you avoid crowd:

If the gym is open 24 hours, the time between 9 PM and 7 AM is also usually less busy hours.

However, if the gym is located near a college or at a place where most members are young, you can also see a real rush after 9 PM.

When Is The Gym Most Busy? 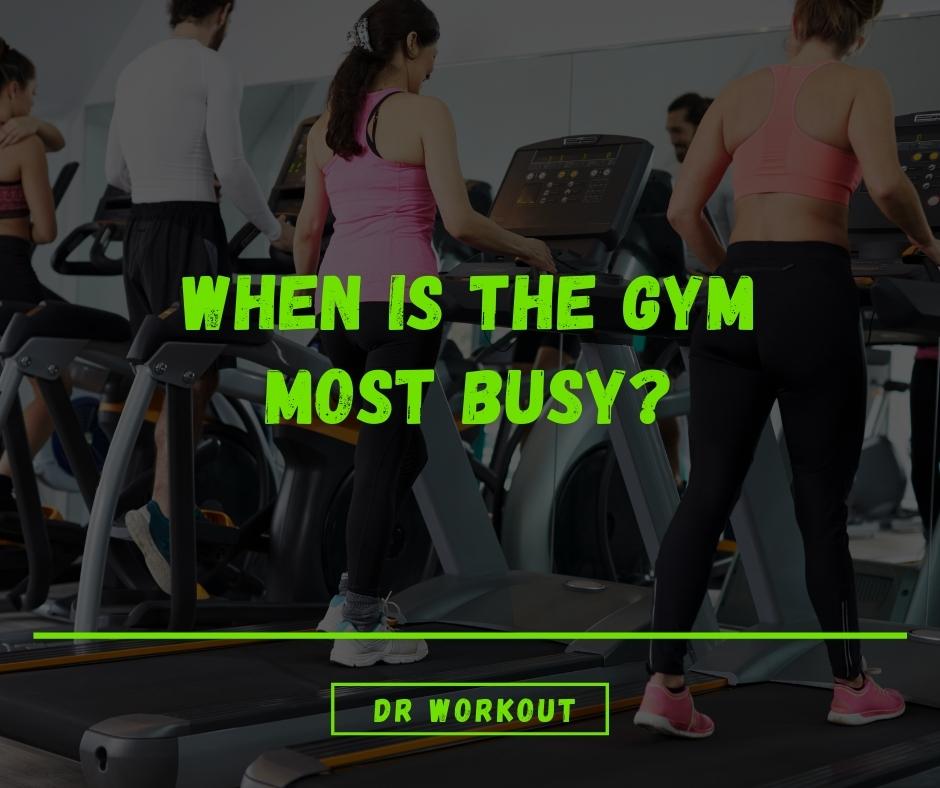 Generally, the gym is most crowded during the evenings, followed by the mornings. By evening we mean the time between 4 PM and 9 PM when everyone would have come back from work or college. It also depends on the day.

For instance, a Monday evening is more likely to be busier than a Friday or Saturday evening. And if Monday also happens to be the first day of a new month, you can witness not just a rush but a tsunami of gym goers in the gym.

After a calm and empty noon, the busy hours begin at a gym by around four in the evening. And between 6’o clock and eight, almost all gyms would be in their maximum rush.

This busiest time at the gym is also the time when too many amateurs or beginners hit the gym compared to any other time of the day. If your gym is not very big, the most popular machines will be occupied and you can also witness some queues around some of them.

So, if you have any other choice and want to avoid the rush, avoid hitting the gym during the evening, especially during the peak gym hours between 6 PM and 8 PM.

Seeing the rush in the evening, you might shift your workout schedule to the morning. But the mornings neither are empty in most gyms. Besides, there will be people planning to hit the gym to kick start their day.

The busiest hours in the morning are from 7 AM to 9 AM. If you can hit the gym before seven, say at 5.30AM, you can expect less rush.

It is the beginning of a new week, and a new chance to be better according to many people. So, most members avoid missing out on hitting the gym on Mondays. So, you can expect more rush on Mondays compared to any other day, especially in the evening.

One idea to avoid the Monday rush is, of course, to avoid hitting it on that day and start off your workout week on Tuesday. But we don’t think that would be a great idea because Monday is a real motivation to have a great week ahead.

Another thing to keep in mind is that most people will be training their chests on Mondays. You can see long queues near the bench press machine on these days. So, you can consider altering your workout plan to avoid the rush; that will be an even greater idea.

What Days Are Gyms Least Busy? 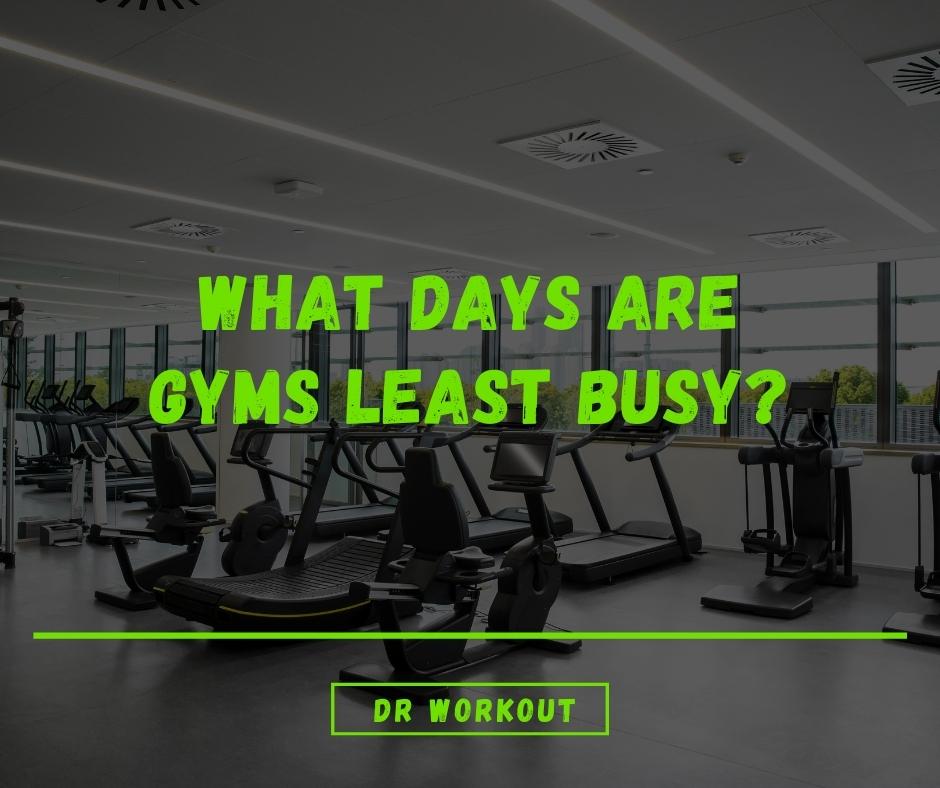 In most gyms, there will be comparatively less rush on the weekend, or on Saturdays and Sundays.

On Saturdays, you can find only serious gym goers working out, while there will also be some people who missed out on working out on some other day of the week. Overall, you can see only a little rush.

On Sundays, gyms would be even more empty than Saturdays. Most people would be taking a day off, going for a holiday, visiting some holy place, or even staying home and relaxing. Some gyms may also close the studio on Sundays.

But it might not always be the case; some people will be planning to start off their weekend or finish their work week through their Friday workout.

So overall, Sundays and Saturdays are the least busy days in any gym, and Friday evenings can possibly be empty as well!

What Days Are Gyms Most Busy? 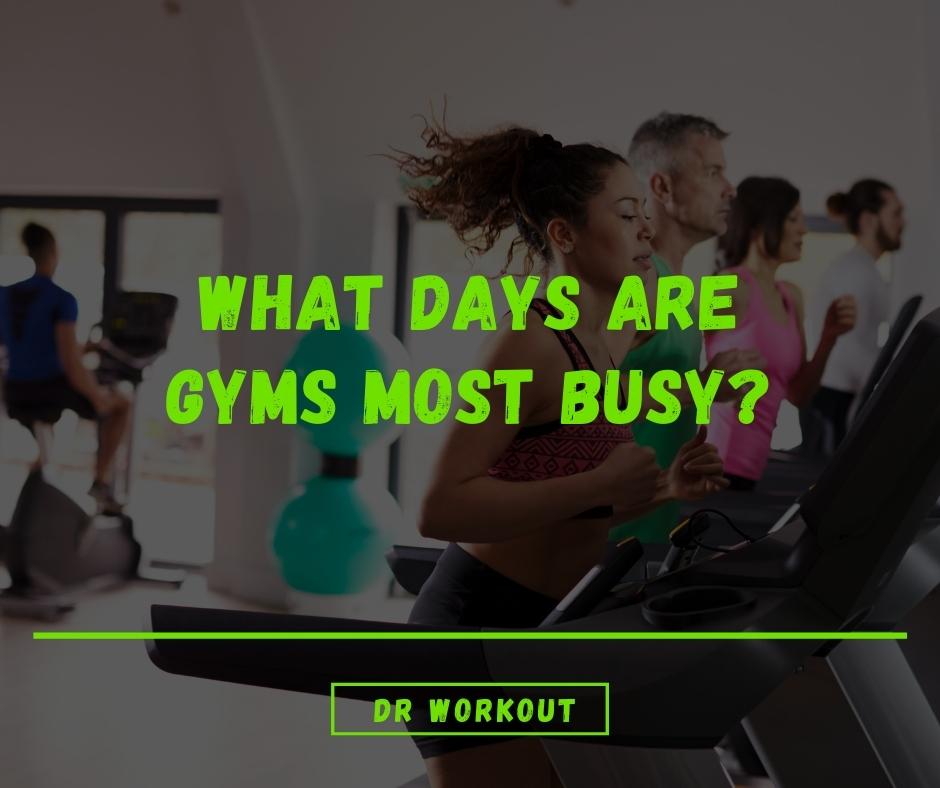 Without any doubt, Mondays are the busiest days in almost all gyms. It’s the beginning of the week, and everyone is trying to have a great start to the week.

Some people would also be trying to resume their paused workout schedule after a while. And, Mondays are perhaps the best days of the week to do so!

But if you can plan your training program strategically, it is indeed possible to escape the Monday rush. Most people would be training for the chest on the first day of the week. If you train for some other muscle group, you can save yourself from the Monday rush.

After Monday, the next four days viz Tuesday, Wednesday, Thursday, and Friday have more or less the same rush.

Are Gyms Crowded On Fridays?

Compared to Thursday which comes before or Saturday that follows, Fridays are usually busy days at most gyms. The major reason for busy Fridays is people planning to wind up their workout week and then enter their weekend.

But compared to Monday, gyms are less crowded on Fridays.

When Is The Gym Least Busy On Saturday

Gyms are usually less crowded on Saturdays. Except in the morning and evening, there won’t be many people working out!

Is Sunday A Busy Day At The Gym?

No, most gyms would be nearly empty on Sundays. Most gym goers would rather take rest on Sundays than work out.

Besides, Sunday is the best day of the week to go for an outing or to chill at home. So, you can expect to see only real gym freaks on Sundays in any gym.

When Is The Gym Least Busy On Sunday?

The afternoon is the time when the gym is the least busy on Sunday.

Are Gyms Busy On Public Holidays

Not in most cases. Gyms are usually less crowded on most of the holidays, while it also depends on what kind of holiday it is.

If it is a festival holiday, Christmas for instance, most people would be spending time with family or friends. Gyms are likely to be empty on such days, if they are open in the first place.

If it’s some other kind of holiday, there can be some rush, but still likely to be less crowded than a usual weekday.

Some holidays, on the other hand, New Year being the best example, are when the gym is most crowded. Of course, on the very first day of the year, everyone is taking up new year’s resolutions and one of the biggest resolutions most people take is regular exercise!

A huge majority of these people start working out on January first, and would stop it after a few days, or weeks, or a month at best. Gyms know this, and they don’t mind this crowd on the new year.

Those were the busiest as well as least busy days you can expect in the gym. With proper planning, you can avoid a big crowd, but still, sometimes will have to adjust to it.

So, even if you happen to be in a crowded gym atmosphere, the best thing to do is to keep calm, and to wait for your turn. You can also request others to let you do the exercise while they rest, and also try being kind enough to let others work in along with you.