Being one of the best low impact cardio exercises, biking is the first choice of many fitness enthusiasts. There has been a lot of debate on stationary bike vs outdoor cycling. If you are gone through that and decided that the stationary bike is one for you, here comes another choice to make, which type of stationary bike you would go for?

If you reached at this stage of decision matrix and about to buy your first gym equipment and confused between the choices among the stationary bikes, then congratulations, you came to the right place. This spinning bike vs upright bike vs recumbent bike article will help you find the answers you have been looking for about stationary bikes. 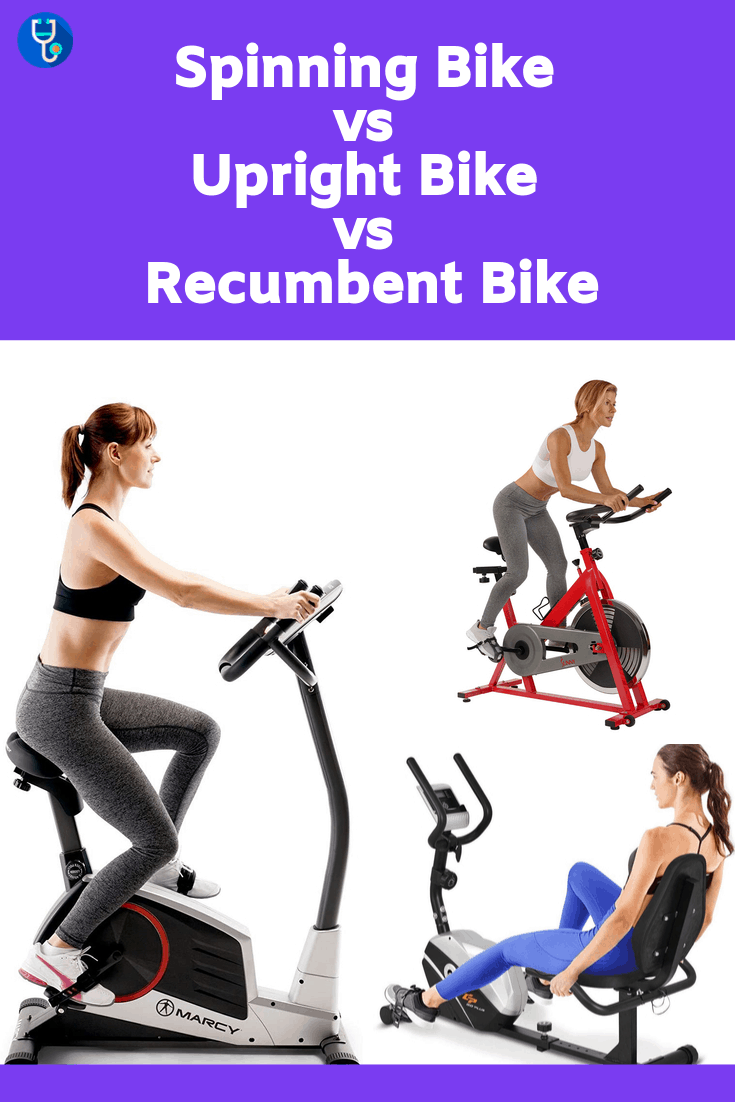 Be it a spinning bike, upright bike or recumbent one each of these have its unique features and advantages. Our comparison between spinning bike vs upright bike vs recumbent bike will help you understand the differences and similarities among these bikes and in turn will enable you to make an informed decision.

None of it can be termed as absolutely best or worst among the three. Which one suits you the best, it depends on your fitness goals and current fitness level. So, let’s know about these bikes and compare them against the requisite parameters. 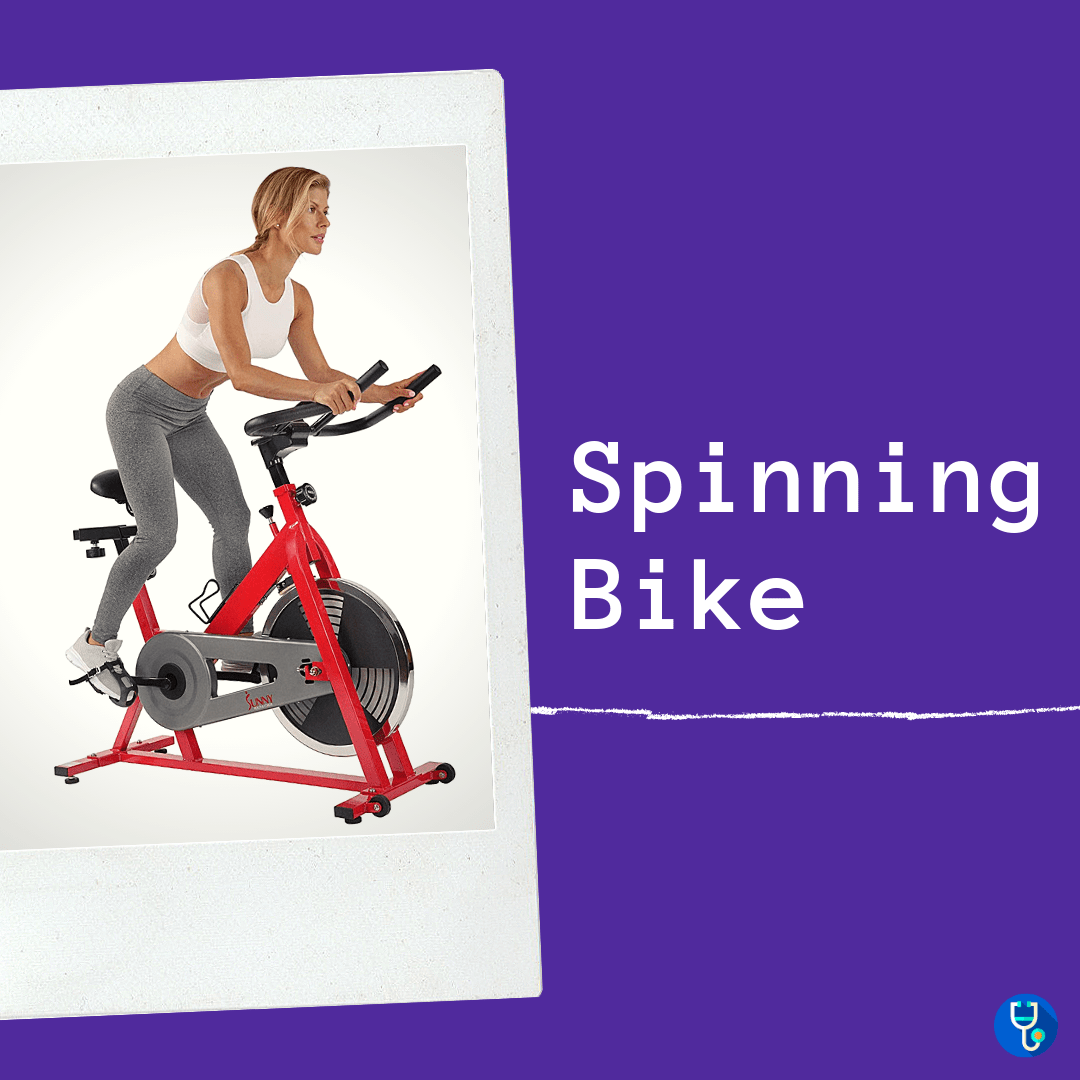 Spinning bikes work on your hips, thighs, calves, core and shoulders. These are the closest you can get to feel like riding a road bike on a stationary bike. The saddle, handlebars and pedal position makes it almost replica of road bike.

The seats of the spinning bikes are not padded. If planning on a longer use the users have to wear padded shorts to avoid saddle sores. You can ride a spinning bike standing up, this makes it suitable for many high intensity interval training programs.

The handlebars of a spinning bike include aerobars, allowing you to get in aerodynamic bent over position. This can help you if you are training for long distance road bike rides or triathlons.

Spinning bikes are readily available at a wide price range. So, even if you are on a limited budget you can go for this one. This needs very little attention and maintenance. 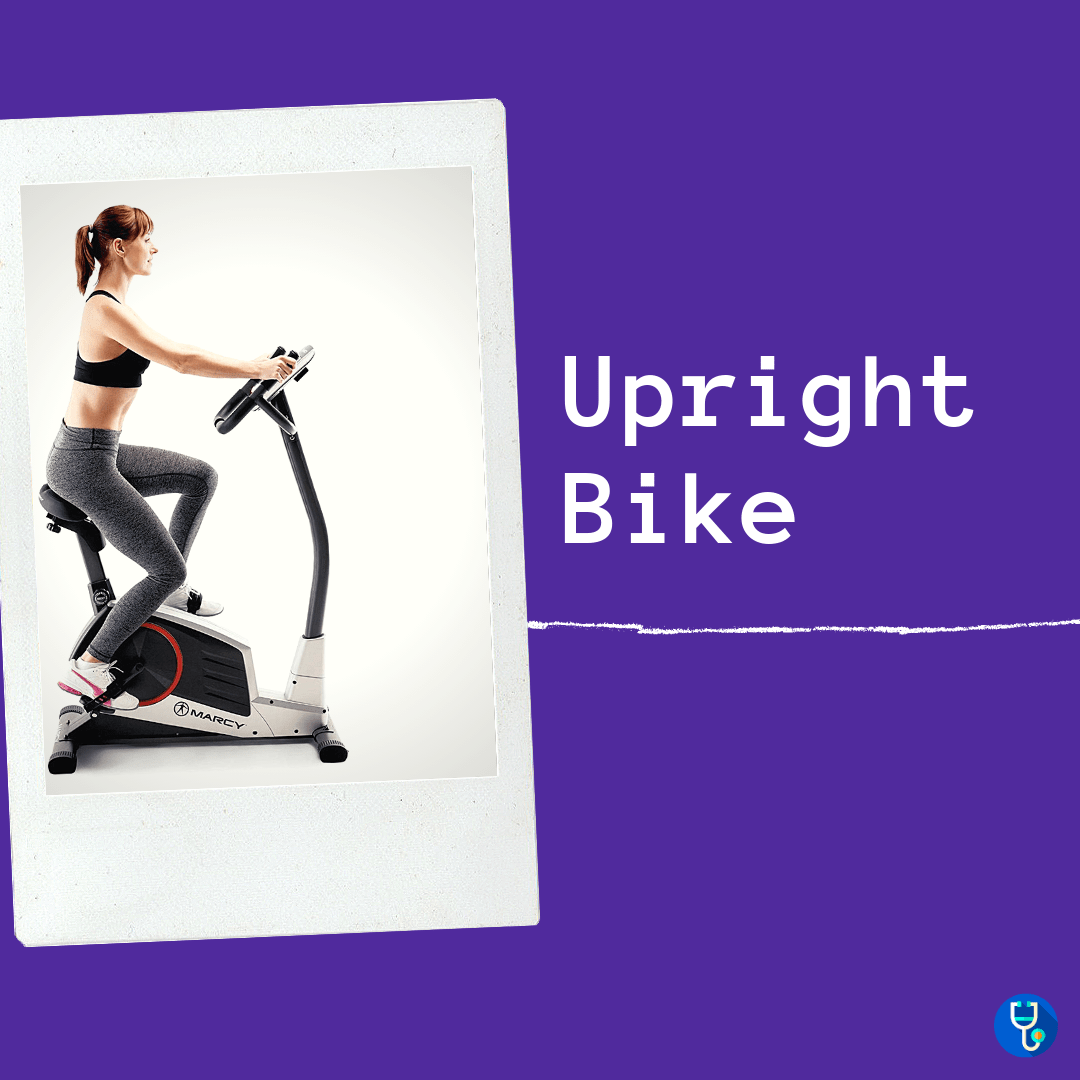 If the spinning bike is a replica of the road bike then an upright bike is close equivalent of the hybrid or touring bike. As the name suggests, you can ride this bike sitting in an upright position.

The handle bars on the upright bike are mostly straight bar or horn which can easily be reached sitting upright. The overall shape and construction of the upright bike keeps you in a comfortable position while pedalling but it is not suitable for intense workouts.

Upright bikes are available with display consoles, bottle holders etc. These bikes are generally cheaper than the spinning bikes. 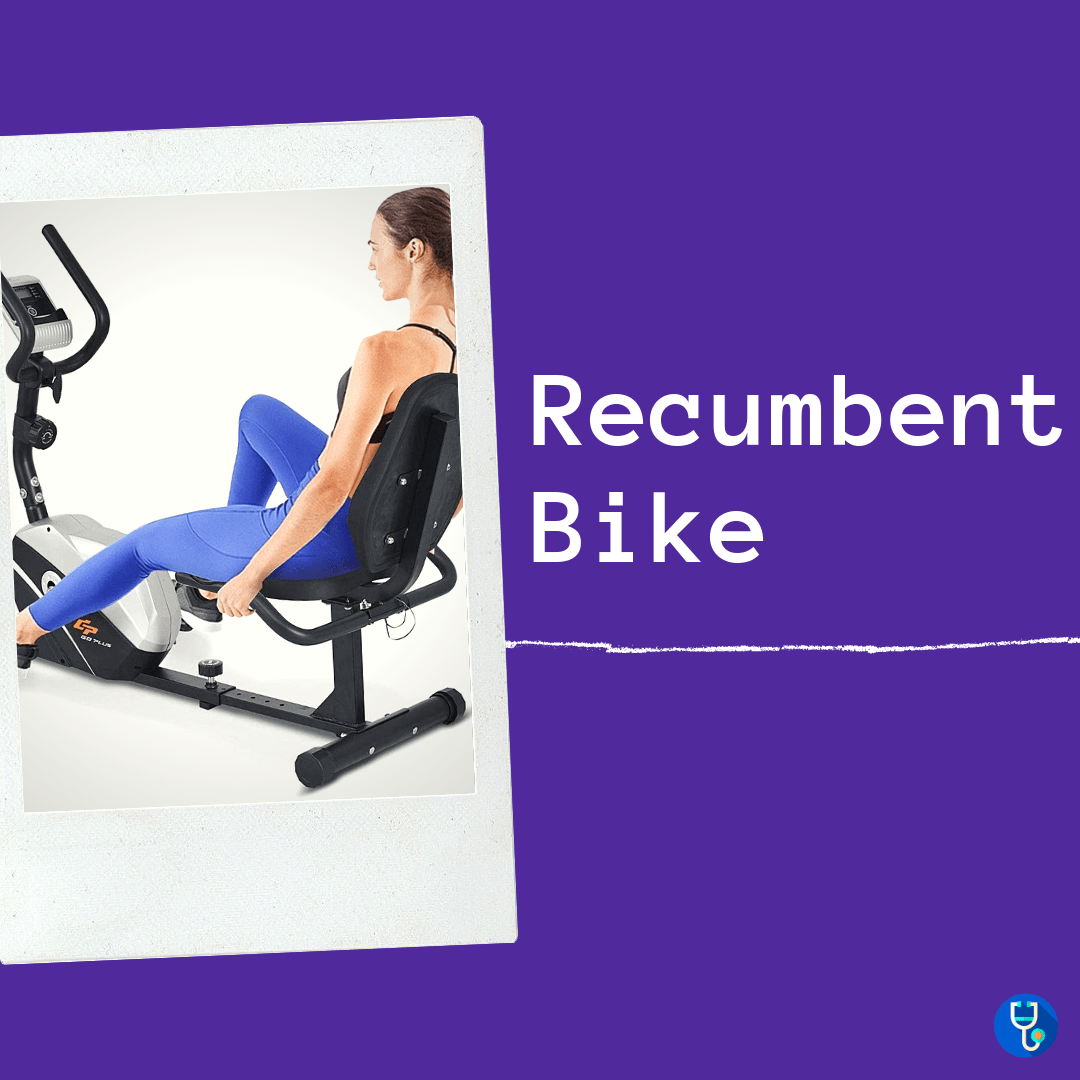 These bikes make you feel like you are sitting on a recliner and moving your legs. The seat of the recumbent bike is like a traditional chair that offers back support.

The seating position is unusual than that of traditional concept of a bike. The back support makes it the most comfortable among all variants. Due to such seating arrangement it is not possible to ride this bike while standing.

There are normally two provisions for hand position in recumbent bikes. One being the grips just below the seat. And the second one is flat bar or horns in front of the user.

The recumbent bike can be called as just leg bikes as the supported back and buttock position doesn’t work your glutes, core or back. These are generally more expensive than the counterparts.

Difference Between Spinning Bike vs Upright Bike vs Recumbent Bike

A spinning bike can be termed as moderately easy to use. As the seat, handle and pedal position allow the user to ride or operate the spinning bike in the position similar to that of riding a road bike. However, bent down aerodynamic position may make it hard on the shoulders and lower back. Hence it cannot be recommended for people with shoulder or back injury. Also, the spinning bikes have heavy flywheel and thus need more efforts to spin it. But once you get the momentum things become easier. Which makes it heavy to operate. The saddles of the spinning bike are usually narrow and not padded which makes it difficult to ride for longer duration.

The bike operating components of upright bikes are at a position similar to the touring bike. As almost everyone has ridden a bicycle as a kid it will be almost the same movement to use upright bike. Unlike spinning bike, you don’t need to sit in a bent over position makes it easy on the back. These bikes have wider and softer saddle than that of spinning bikes which makes them easy to sit on for longer duration.

The recumbent bikes are the easiest to operate among all. This relatively new movement pattern will remove strain from the equation. The large seat with back support keeps you so comfortable. You don’t need your hands to operate recumbent bikes. Your hands are totally free from the strain. This setup let you to watch TV, read a book, or play mobile games during your workout session.

Biking is the cardio exercise which is considered using as a means of losing weight and thus calorie burning in given time would be the important factor. But when it comes to these three, there is not much difference in calories burnt if you put in the same amount of effort.

With the spinning bike you can do high intensity interval training which allows you to put in more efforts in less time, hence causes burning the calories faster. On the other hand you are relatively more comfortable on recumbent bike so you can spend more time on them per session than the other two.

The spinning bikes are mostly manual and doesn’t come with console. The heavy flywheel makes it harder to turn the pedal at the beginning requiring more efforts and thus burning more calories than other bikes, but the absence of programmability leaves it without an option to change the efforts required in pre programmed way.

Pedalling being a non impact exercise has very less chances of injury and the indoor bikes also eliminate the odds of road accidents that may happen during out door cycling. Still if we compare among these three these bikes differ in the risk a user might be facing.

In upright and spinning bikes your body weight is coming down on the tailbones. Also due to its there will be more stress on quadriceps. These things can cause stress injuries in the tailbone and the knee in longer term.

All the stationary bikes work on the lower body primarily. Moreover, while using the recumbent bikes your back remains supported and the movement patter is such that it works only on legs. The only muscles worked with recumbent bike are quads, hams and calves.

With upright bike you have to keep your body upright hence need to engage core, glues and erector spinae muscles. Thus, these muscles are also worked along with legs if you work on upright bikes.

The spinning bike pedalling engages and works most of the muscles. The leaning forward pose needs you to work your shoulders, biceps and triceps. The movement pattern engages core, glutes, quads, hams and calf muscles.

All the bikes have the ability to crank up the resistance and hence increasing the intensity. Also, you have the option to raise the speed of pedalling when you wish to. The progression can be achieved through strategically increasing the speed or resistance or both according to your training plan.

Besides, the upright bikes and the recumbent bikes come with the programmable console. In this you can pre-program the bike to cause needed resistance at particular stage of the workout and keep the pedalling at your natural speed.

Recumbent bikes provide a great cardio. As these are used with comfortable reclined position, you can work for long duration per session and get better results. But when it comes to strength benefits these are effective only on quads has and calf muscle strength training.

Among the three the recumbent bikes are most expensive. The big seating arrangement, programmable console and large structure makes costlier than the others.

The spinning bike comparatively has the least number of parts. But due to the heavy flywheel and high strength pedals and cranks required for standing up riding, these are slightly at higher price than similar upright bike.

Upright bikes are the least expensive among all. If you are new to stationary biking and low on budget it makes sense to go for the upright bike. As it does not make a hole in your pocket and also it does not take any break in period to get used to it.

Now you got to know the advantages and disadvantages of these bike types through this comparison of spinning bike vs upright bike vs recumbent bike. All of these are great choice if you are looking to work on your lower body or training with the goal of losing weight.

On some parameters the spinning bike is better than other two and on some recumbent bike is better, the upright bike beats them both in pricing. The choice of right bike for you depends on which parameter is important to you. For example, if you are training for triathlon you have to go with spinning bike for more authentic outdoor bike or road bike experience. Here you can not think about how comfortable my workout should be or can’t go cheap on the cost. On the other hand, if you have some back injury or weak shoulder you must choose recumbent bike even if it is costly.