If we were to count the number of fitness enthusiasts who have been intimidated by pull ups there would be quite a few of them.

A typical pull up exercise would involve a person holding a bar that is above his head and pulling his body upwards, till his chin is above the bar. There is no doubt that it involves major muscle groups of the upper body, in addition to the core.

While performing a pull up, a person is required to lift the weight of their entire body, using the muscles of their arms and back. Though this might seem like a lot, you must take into consideration that there are multiple muscles worked through their entire range of motion here.

If you have a good understanding of the kind of musculature involved in a pull up, you will certainly have an easier time engaging the correct muscles required for the exercise, leading to better and swifter results. So read on to know more.

What Muscles Do Pull Ups Work? 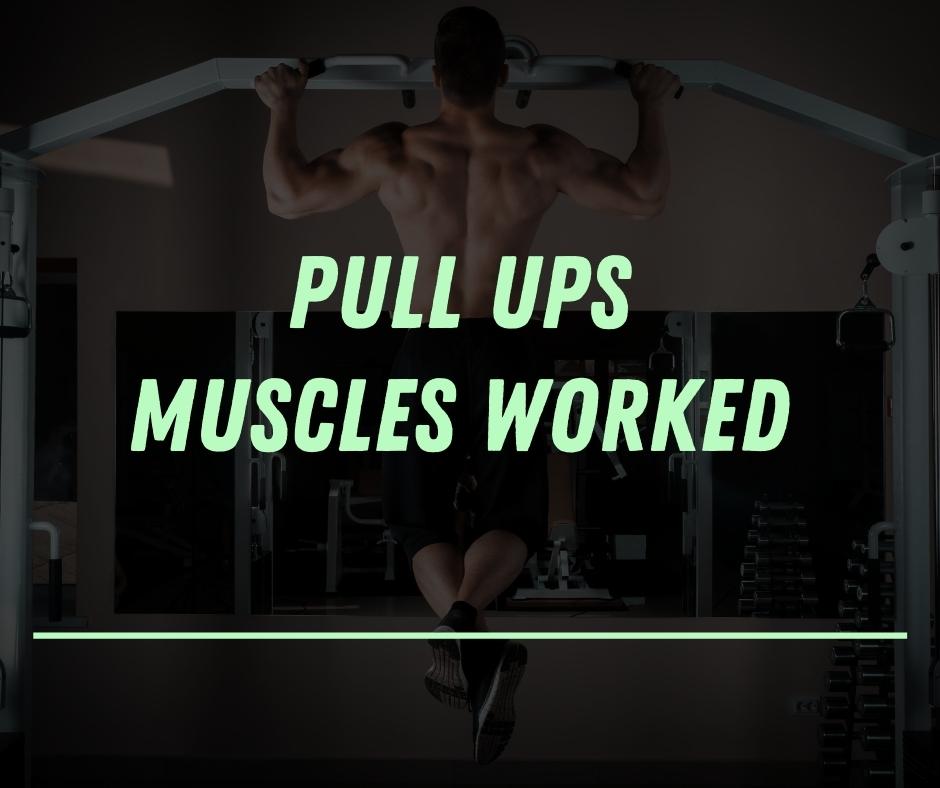 The primary muscles put to work here are the trapezius, lats and a few more back muscles. However, as has been stated previously, there are a few more muscles engaged in the activity. These perform a synergistic action. Meaning, that they are the ones that assist in movement.

Once you know about the locations of each of the muscles, you will find it considerably easier to perform the exercise by yourself. You could also consider using one of the many variations of this exercise.

Let us now discuss the different muscles that come into play when a person performs a proper pull up.

The trapezius is a large, broad muscle that spans the area between your lower neck and back.

The trapezius is needed to stabilize the scapula when it slides upwards and downwards. This is important as the scapula is a triangular bone on the back that helps in the movements of your arm, especially when it has to be lifted overhead.

During a pull-up, the trapezius muscle will pull both the scapula backwards and downwards. Hence, repeated pull-ups will automatically result in the strengthening of this muscle.

The pull up is a great way to increase the pull strength of the trapezius muscle. Short pauses before lowering the body will also result in better endurance of this muscle.

Pull-ups greatly benefit swimmers and heavy weight lifters as both these professionals use a good amount of overhead abduction and rotation of the arms.

When beginners begin to train this particular muscle group it will result in better scapular rotation and depression. This in turn will help a person to lift his arms better while performing other pull exercises.

Advanced lifters have an added benefit when they train the trapezius muscle as it results in a stronger back, preventing injuries.

The latissimus dorsi is a large muscle group that plays an important role in pull ups as well. The primary function of the muscle is to help in the adduction, extension and internal rotation of the shoulder.

Pull ups engage the latissimus dorsi muscle from the bottom to the top. Since this muscle spans a large area of the back, pull ups result not only in an increase in the pulling strength of the muscle but also help in developing its width. This gives the appearance of an aesthetically pleasing back with deep furrows and popping muscles.

Pull ups are great exercise for rowers and CrossFit trainers. In addition, they help to stabilize the spine while strengthening both the shoulder and the back.

Training the lats results in greater stability for the neck, back and hips, among beginners. It is also able to prevent injuries in the same areas for advanced level weightlifters.

The posterior (back) part of the deltoid muscle is one of the many muscles worked while performing a pull up using an overhead bar.

The posterior fibers of the deltoid muscle are usually involved in assisting the backward movement of the arm. Hence, it is useful in shoulder extension, external rotation and horizontal abduction.

During performing a pull up, the deltoids will act as assisting muscles to the latissmus dorsi, especially when the person begins to pull himself over the bar.

This will result in an increase in both pull strength as well as endurance strength of the muscle.

Almost all contact sports require the engagement of the posterior fibres of the deltoid, but swimmers, golfers and basketball players benefit from this training this muscle in particular.

Among all the other muscles used this is a long muscle that runs down the length of your back, ending right above the hip bone. If you look at it closely, the erector spinae muscle is made up of three distinct muscles that run parallel to each other.

The function of this muscle is to straighten the back and also help with sideward rotations during pull ups.

During a pull up, the erector spinae will help in keeping the lower body streamlined. The stabilization of this muscle will result in fewer back rotations (during pull ups) that could lead to injury or strains.

Pull ups will result in the training of the thoracic erector spinae, which greatly benefits weight lifters (especially those who perform deadlifts) and other bodybuilders as well.

This is probably one of the most commonly known muscles and it is present on the front of your upper arm. It is another main muscle activated when performing a pull up.

The primary function of the biceps is to flex the elbow. Elbow flexion is also one of the main actions required to perform a pull up.

Training the biceps via pull ups will lead to an increase in the muscle bulk of this muscle while also improving its endurance.

It would be tough to put a finger on a type of sport that does not need strong and well-developed biceps. Hence, we can safely assume that biceps training is crucial for daily activities as well as advanced sports.

The Rhomboids would have to be termed as a group of muscles rather than one muscle. They run from the spine to the shoulder blades and are minor assistants to the other muscles used in pull ups.

Since they are placed in the sweet spot, between the spine and shoulders, their function is to pull the shoulder blades together.

While doing a pull up, the primary function of the rhomboids is to stabilize the shoulder girdle and the scapula. They bring the shoulder blades together and repeated action of the same results in an athletic posture and frame that is enviable.

The infraspinatus is a triangular muscle that runs from the head of the humerus bone to the spine. This helps in extending the shoulder.

The Infraspinatus is essential to all sportsmen who need strong shoulder extension eg, basketball players, rowers and also billiard and pool players.

Pull-ups are a fantastic exercise to train your upper back muscles. Their execution targets mid and lower trapezius, rhomboids, and rear delts. Overall back development is not just confined to having wider lats. Your upper back muscles also need to be adequately developed and performing pull-ups can serve that purpose quite well.

Teres major is often referred to as an ally to the latissimus dorsi. Its prime function is to pull down your arm vertically. When you perform a pullup, your lats enable you to pull yourself up whereas the teres major assists the movement by pulling your elbows down. Owing to this reason, performing pull-ups provide a decent workout to your teres major as well.

Pull-ups provide a decent workout to the muscles in your forearms, especially your brachioradialis. Apart from that, pull-ups also work on enhancing one’s grip strength as their execution requires one to balance their entire body weight on the arms.

The abdominals are involved in almost every exercise that uses your body weight as resistance and pull-ups are no different in this regard. When you perform a pull-up your abdominals have to work harder to stabilize your upper body and legs. This in turn works on enhancing your core strength.

When speaking of the muscles engaged it is difficult to determine a particular muscle that can be given credit for the action. A good pull up is the result of correct muscular engagement and tons of practice.

Though they are not the easiest to perform, pull ups can become a part of your regular exercise plan. They help in improving posture and balance, strengthen the muscles of the back, arm and shoulder, improve grip and result in greater upper body strength. What more could you need to convince you to give this exercise a try?