Mark Robert Michael Wahlberg is an American actor, rapper, restaurateur, and producer as well, born on 5 June 1971 in Boston, Massachusetts, U.S.A. Known for his epic roles in movies like Renaissance Man, The Departed, Planet Of The Apes, Transformers, The Fighter, and many more. He was nominated for the Golden Globe Award for Best Actor, for “The Fighter” in the year 2010. No surprises he was World’s Highest-Paid Actor in the year 2017.

Apart from movies, he had worked with the music group Marky Mark and the Funky Bunch. Also known as Marky Mark he released a few music albums too. This guy has tried all, movies to music concerts to producing HBO series, and everywhere he had left footprints to follow.

Mark is also known for drastic physical transformations. According to director Peter Berg, no one can pull off weight gain or loss for a role like Mark Wahlberg. He has worked with him 4 times and he knows him inside out.

Going up to 212 lbs for “Pain And Gain”, then plunging to 137 lbs for “The Gambler”, it is evident how serious this guy is regarding transforming his physique according to the roles. So what is so special regarding Mark Wahlberg diet plan? Let’s find out.

Imagine working out at 2:30 AM and having the first meal by 3:15 AM, requires dedication. Yes, this is the wake-up call of the day for Mark. He makes sure all his diet schedules never run short of essential nutrients such as protein and vitamins. Following is Mark Wahlberg’s bodybuilding meal plan, which keeps this fitness freak running. 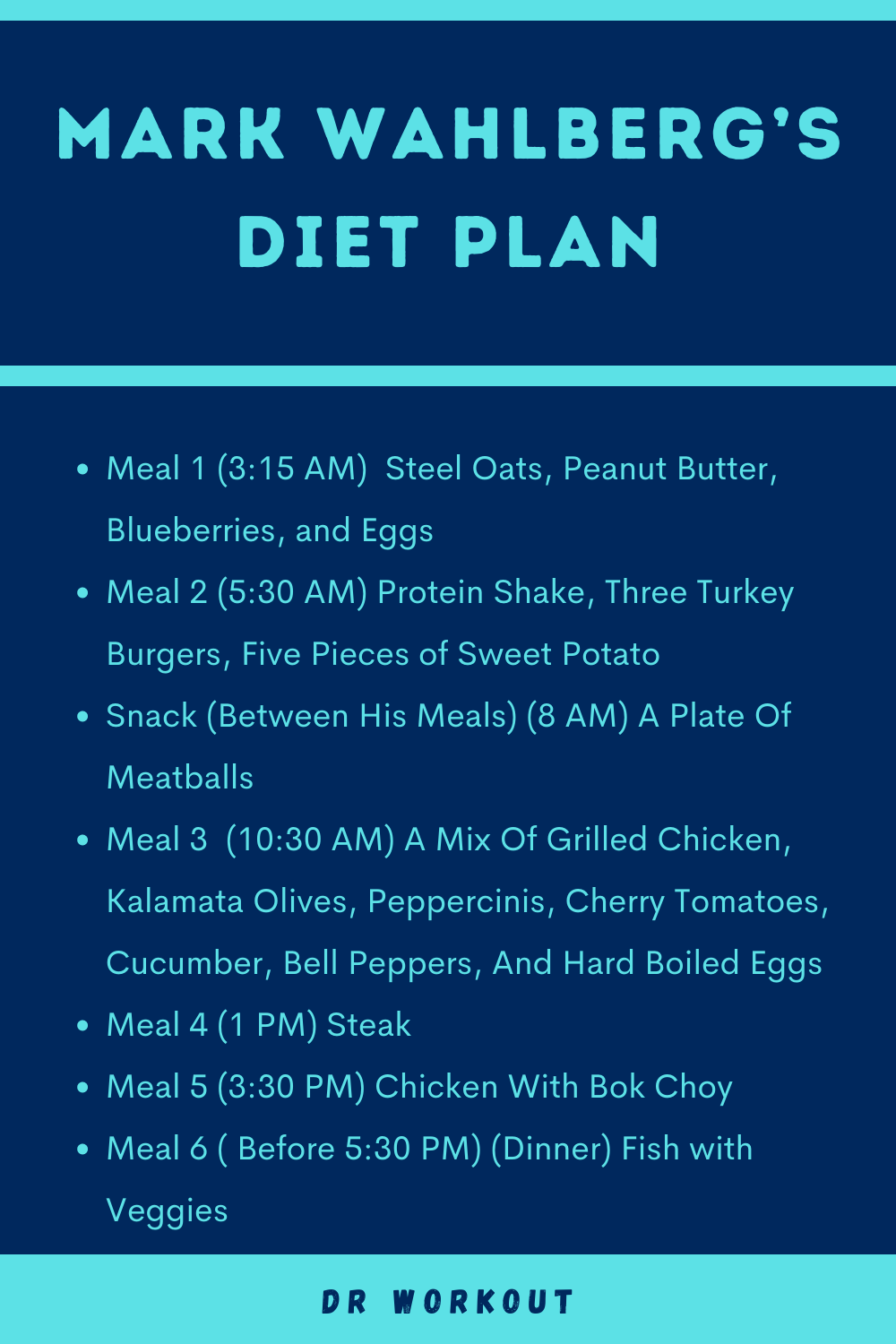 Mark explains his diet chart as a three breakfast schedule. The first three meals in his diet plan he terms as three breakfasts, followed by 2 snacks and dinner before going to sleep at 7:30 PM. It’s about distributing your meal plan into six smaller meals. Mark Wahlberg diet consists mainly of meat products, which fulfills his protein requirements to some extent.

Apart from ensuing a well-nourished nutrition plan, he makes sure he hit his bed by 7:30 PM. There is a saying “Sleep is a golden chain that ties health and our bodies together”, and it is true to the core. The basic rule of thumb here is “Eat, Sleep, And Repeat”.

Mark doesn’t maintain a long list of supplements. He relies heavily on three basic supplements: BCAA’s, Multivitamin and Protein Shake. He follows an old-school approach, sticking with the basics and keeping them straight to the point.

Going through Mark Wahlberg diet, it is evident enough how much of hard work and commitment is needed to make a desirable physique. Getting up much before the first ray of sunshine and that too every single day is some serious effort. His regime is a perfect example of counting calories and making them effective to the core. No one would believe this hot bod is 49 years of age. His ardour for fitness is none less than exemplary, which shows it’s not only about hiring celebrities trainers, and a team of dietitians, that would make you achieve that dream figure. It’s all in the mind and that’s all that matters.