In today’s world, where fitness has become such a big rage, there are various types of workout that people are looking for. Out of the many available, the spin bike has picked up momentum in recent times.

Although it dates back to the 1980s, the spin bike has gained popularity over the years. Cycling is easier on the joints as well as provides a full-body workout.

Choosing the right spin bike involves a lot of factors like the flywheel weight, cost, brand, etc. But one of the most important criteria is the resistance of the indoor cycle.

There are two types of resistance mechanisms that work on a spin bike. One is the Magnetic Resistance, and the other is the Friction Resistance. Let us try and understand the difference as well as the benefits of each of them to help us in choosing the right spinning bike. 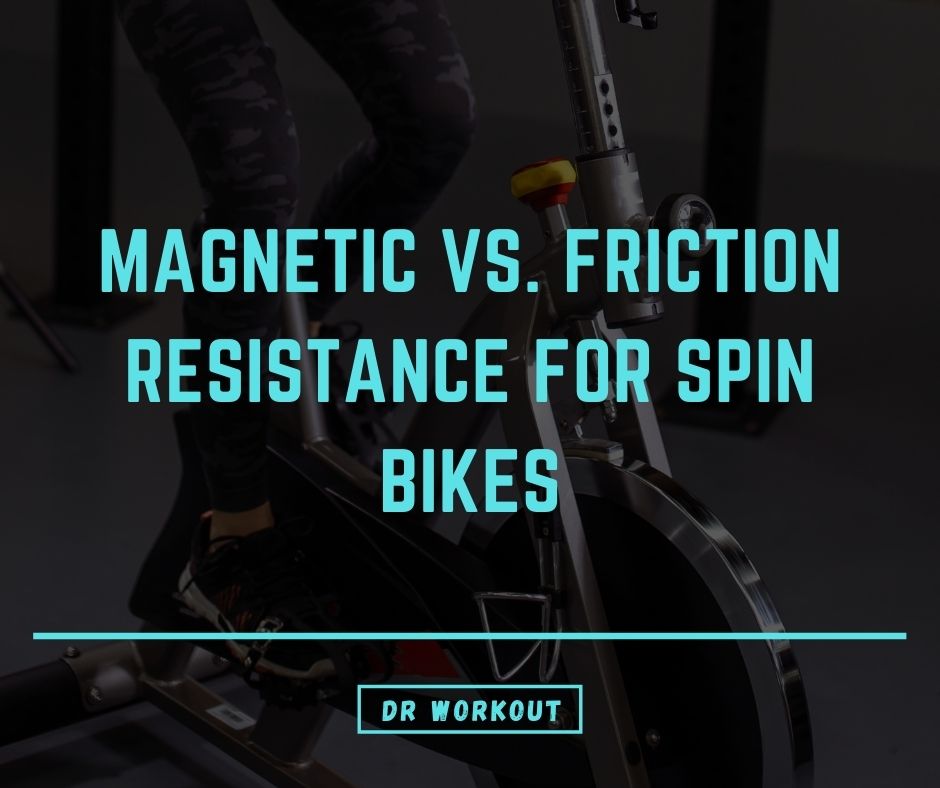 To differentiate between a Magnetic Spin bike and a Friction Spin Bikes, we first need to figure out what resistance is and why it is important.

Resistance in a spin bike helps in elevating the intensity and strengthens our workout. If a person wants to train for uphill terrains, then he will need to consider increasing the resistance in his bike. A decreased resistance while training gives a feel of moving downhill. Also, HIIT workouts are possible with a higher resistance incorporated into spin bikes.

As the name suggests, Magnetic resistance utilizes magnets to create resistance. The resistance in spinning bike increases or decreases depending on the magnets moving closer to or away from each other.

Friction resistance work using felt pads resting on the front or back portion of the wheel. Once the knob on the friction pad is tightened, resistance is created.

Off late, Magnetic resistance is being incorporated into spinning bike designs. As mentioned earlier, Magnetic spin bikes work on magnets. A usual design of the bike would consist of two magnets parallel to each other separated by a flywheel.

The flywheel, which is made up of metal, acts as a conductor. It spins via the magnetic field and force surrounding the magnets. This, in turn, causes a drag or resistance on the flywheel to produce an eddy current. This energy current moves 90 degree to the magnetic field in a closed circuit.

The resistance level in a Magnetic spin bike has a decent increment amount but does not usually reach a level where it is impossible to cycle. Even at the highest resistance level, it is possible to perform cycling without having the wheel to stop.

Since this type of bike works on the principle of Eddy current, the resistance level changes as the pedaling goes faster. It Is similar to riding a cycle outdoors, wherein the faster you pedal, the more resistance from the wind is what you get.

This type of exercise bike provides a sufficient amount of resistance level for an intense workout. It also helps to keep a progressive report so that you can challenge it in your next indoor cycle workout.

Friction Resistance Spin Bike: This indoor cycle does not provide a display monitor which specifies what resistance level you are at. This gives more room for the felt resistance to increase till it is not possible for the rider to continue cycling.

In this type of exercise bike, you need to arbitrarily change the amount of resistance that you may have achieved previously, as there is no display.

The resistance level is not dependent on the speed or rhythm you are cycling at. The Friction spin bikes are suitable for professional cyclists who can handle a potentially limitless resistance level.

Magnetic Resistance Spin Bike: Since the working principle is based on magnetic resistance, this type of spin bike is almost inaudible.

Friction Resistance Spin Bike: Felt pads generate noise. The whooshing sound produced is caused by Friction resistance as the felt pads rub against the flywheel. Proper lubrication is required to dampen the sound, however, not totally.

Magnetic Resistance Spin Bike: This indoor bike requires less maintenance as there is no friction between magnets and no dust produced. Also, no lubricant is required. If at all, there would be minimal maintenance required to fix wires or screws.

Friction Resistance Spin Bike: Due to the friction between felt pads, they wear out as well as corrode. The Friction exercise bike needs to be replaced at least once a year. They produce small amounts of dust as well.

Lubricants are required to prevent too much friction. Also, the pads may need to be re-aligned to provide for an equal level of resistance.

Magnetic Resistance Spin Bike: When the resistance is increased, there is a little lag until you start to feel the resistance level changing. This may be a concern for experienced cyclists who are not used to this type of stationary bike.

Friction Resistance Spin Bike: The felt resistance level in this type of spin bike is instantly increased upon turning the knob. It gives a feel of outdoor cycling uphill or on an incline. Since the shift in resistance level is evenly changed, it provides a smooth experience while cycling.

Magnetic Resistance Spin Bike: This type of stationary bike is more expensive as its cost of manufacturing is higher.

Friction Resistance Spin Bike: It is lesser priced as it does not have additional features like an LED display etc.

Keeping the pros and cons in mind, we have seen that both types of stationary bikes offer the essential requirements for a good workout.

Both spin bikes would offer the desired results and would take the fitness to the next level.

Choosing the right type of resistance spin bike should depend on your workout intensity, goal, and requirement of your workout. The best way to decide would be to test each type of spin bike before making your purchase!