Bodybuilding and painting are like the two different sides of a river. One needs immense physical and mental strength and the other requires a vast horizon of visualizing power. What if a guy has both of these virtues and uses them to excellence. I am talking about Leslie Kai Greene aka Kai Greene or Kai L.Greene. This American pro bodybuilder was born on July 12, 1975, in Brooklyn, New York City.

From his younger days, he was brought up in an orphanage, and due to this troublesome nature, he found it hard to be with people around him. Finally, he discovered himself to be at peace in a place where he could lift weights and workout.

His dedication to the sport and his evident physical development drew his seventh-grade English teacher’s attention. He encouraged him to start training like a professional and perform like one in events.

Kai merged his passion for painting with his love for bodybuilding and portrayed it beautifully in front of this world. He has also tried his hands into creating self-portraits, acting in movies, and inking comics.

Apart from winning so many competitions, one thing which made him famous was how he couldn’t win Mr. Olympia. After having tried 6 times he wasn’t able to earn the badge. Once he missed it by a whisker. The distance between him and his dream podium was of one mere point and this always kept this muscle monster in agony all through his career span.

Kai Greene’s diet plan is all about eating what your workout demands. His bodybuilding meal plan is high on protein and complex carbs and low in fat. He keeps a count of every bite of his meal. He follows “count and eat” rule of thumb. Let’s discern his diet chart. 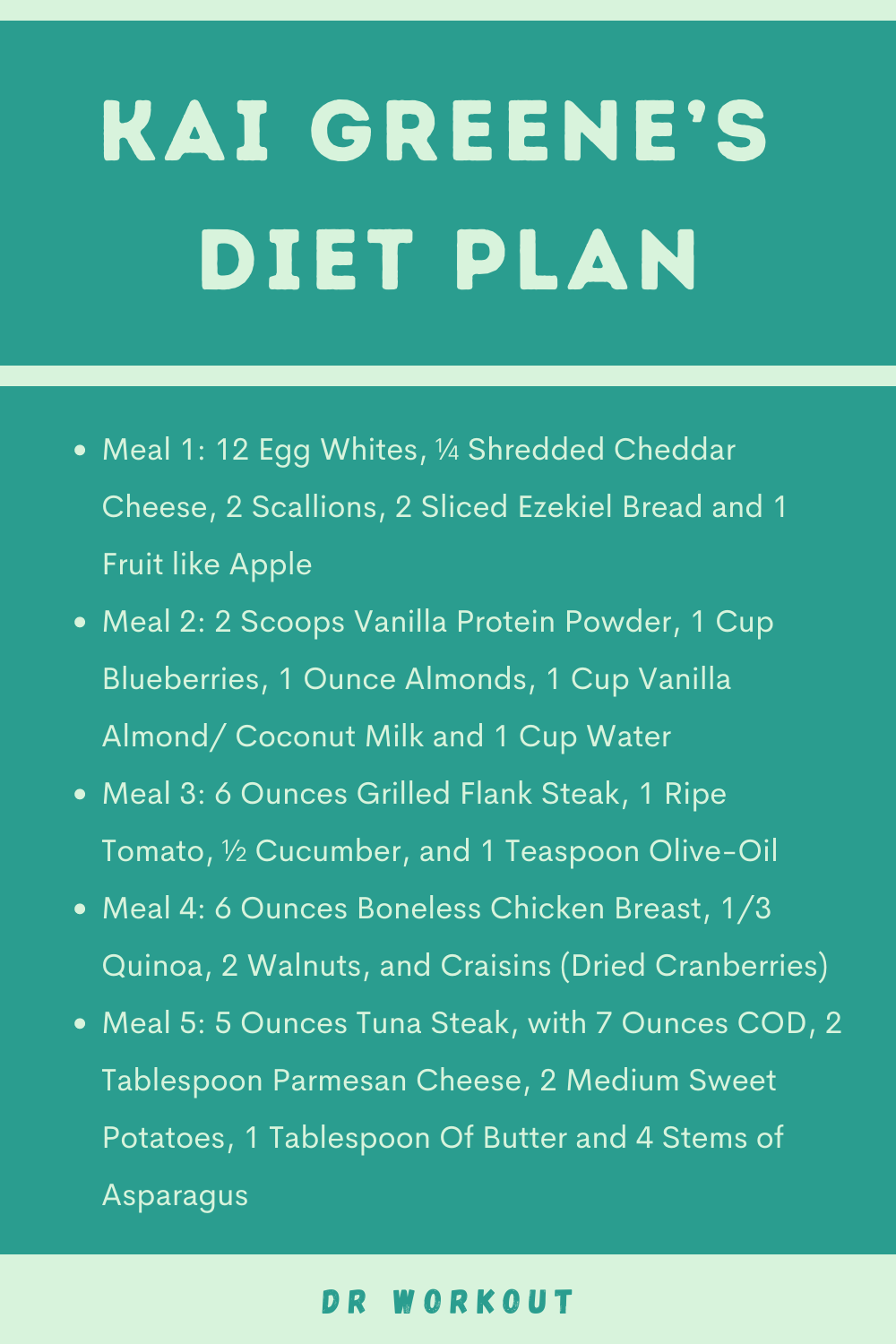 He eats every couple of hours, about 6 meals a day, one of that is a protein shake. Kai prefers a strict diet that contains 1.5 grams of protein per kilogram of his muscle mass and 0.5 grams of healthy fat per gram of his body weight. He also makes sure to gulp down his protein drink 30 minutes before his workout session. Kai Greene diet is a complex yet highly nutritious diet plan.

He advises avoiding food like junk and fried food, artificial additives, added sugar, and chemical ingredients from your diet plan. On the same hand, he advocates including food like eggs, chicken breast, steak, salmon, white and brown rice, salads, and sweet potatoes, and most importantly water in your daily meal. He knows the importance of water and drinks 2 gallons of water every day.

Apart from his healthy diet, Supplements play a vital role in his regime.

According to Kai, ‘it’s all about muscle control‘. Bodybuilding has hand in hand relationship with consuming supplements. In 2015, he launched his supplement brand called Dynamik Muscle.  Kai also follows the simple yet effective routine of supplement consumption. Following are Kai Greene supplements, his favorites, and must-haves.

Kai Greene’s diet plan is all about keeping every possible nutrient in it. In a nutshell, it’s a wholesome nutrition plan. He also states that having a sound sleep is essential not only for recovery but also helps the digestion of food and enhances your metabolism too.

Kay Greene has been through what one can not even imagine in his wildest dreams. Having nothing at the starting of his journey and hanging his boots up after ruling the bodybuilding arena for the longest time, his story is like a fairytale. All this because of his sheer willpower and zeal for excellence. Kudos to this fighter.