Jungkook, from the famous band Bangtan Boys aka BTS, has garnered much love and attention from his fans around the globe because of his melodious voice. Apart from having a beautiful voice, Jungkook also has a physique that adds to his magnetic personality. So in brief, you can say that Jungkook is a talented singer, who has a muscular and lean physique and his dance moves can set the stage on fire. It would certainly be impossible to not become a fan of Jungkook’s charismatic persona. In this celebrity workout guide, we are going to provide you an overview of BTS Jungkook’s workout routine.

As compared to other members of the famous pop group BTS, Jungkook is quite muscular. The other members of BTS jokingly admit that at times they fear him owing to his strength levels. His strength can be seen in a video in which he is peeling a pineapple with his bare hands. Isn’t that some hell of a strength?

But the strength and muscularity of Jungkook that you see today is an outcome of many years of hard work. He has always been into sports right from his childhood. His penchant for sports further took him to enjoy weight training sessions. He is so passionate about his workouts that he even carries dumbbells when he is traveling. At times when he doesn’t have his dumbbells around, he relies on bodyweight movements like bench dips and push-ups. His dedication towards his workout routine and physical fitness was also admired by Deadpool (Ryan Reynolds).

BTS Jungkook workout routine might look simple but it’s definitely not easy. After all, the muscular and defined physique of Jungkook can certainly not be achieved with easy-to-do workouts. Apart from working on his musculature, Jungkook also makes sure that his workout plan also takes good care of his athleticism which gets exhibited in his flawless dance moves.

Being committed to his workout plan and strict diet, Jungkook has been able to achieve a physique that is enough to make his fans scream and shout out of excitement seeing his defined abs. His fitness trainer has also claimed that Jungkook’s dedication towards his workouts is unparalleled. The following section will provide you Jungkook workout routine. So if you also want to have a physique like Jungkook, which you surely do, you know where to look for.

Following a well-structured workout program and diet, Jungkook was able to put on 5 kg of weight, most of which was muscle, since his debut. Recently, Jungkook had uploaded a video on BTS’s Twitter account in which he has seen training with weights. The video provided his fans and followers with great astonishment seeing his amazing strength. 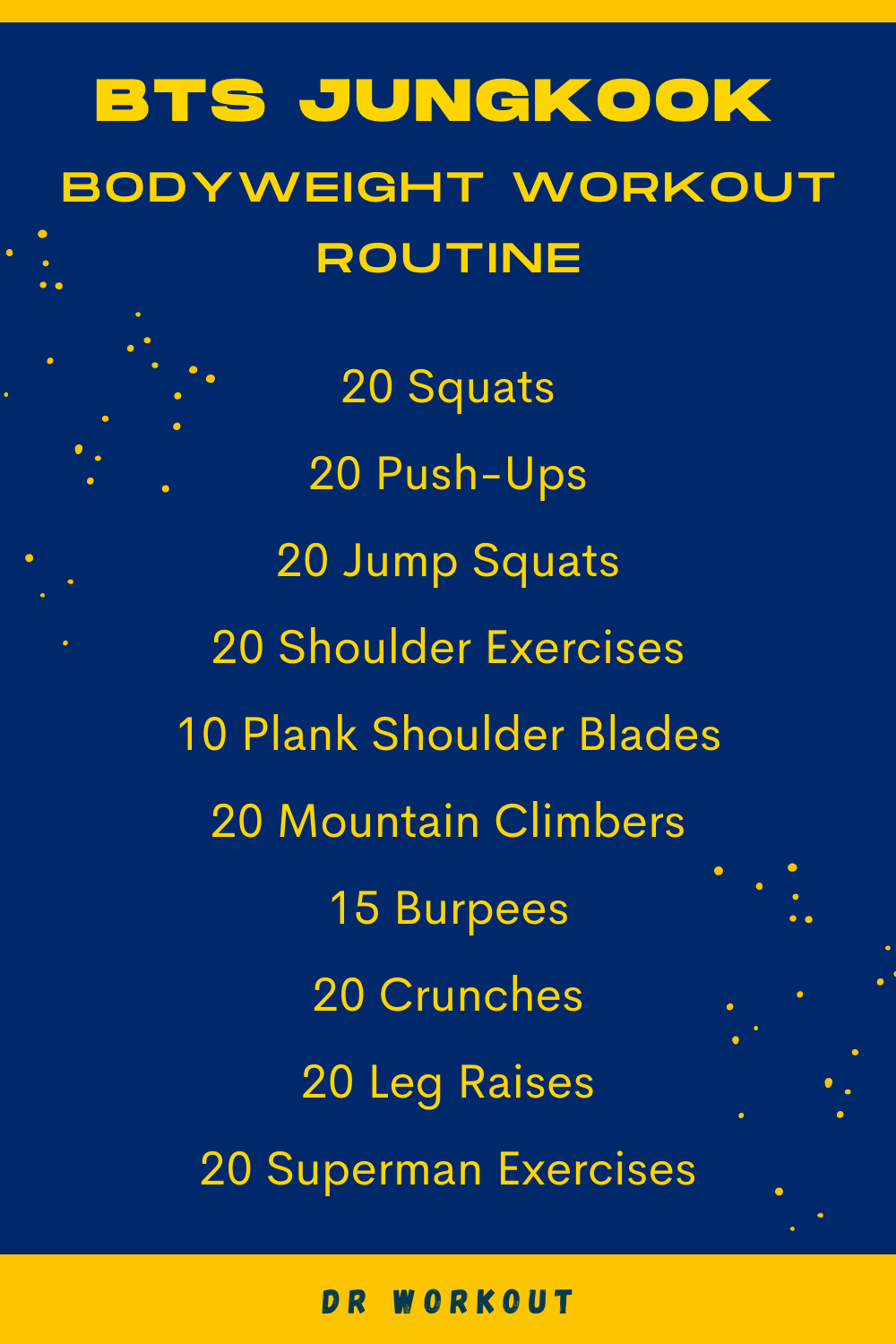 It has even been said that the exercise routine of Jungkook consists of exercises that are performed in a manner that can be too challenging even for military personnel.

Recently, Jungkook showed the exercises that he usually performs in a note on his phone. Let’s have a look at them:-

Dancing forms a crucial part of the training program of the Bangtan Boys. Their dancing sessions are the reason they effortlessly dance their way to your heart. Dancing also helps them in burning off the excess calories which thereby keeps them in perfect shape.

Following Jungkook workout routine, you can either resort to dancing or include some cardiovascular exercises like running, skipping, etc. in your workout program.  You can choose to perform your cardio five days a week for 45-60 mins to keep your body fat percentage low and promote leanness.

So by now, you would have been absolutely impetuous to try out BTS Jungkook workout routine. Isn’t it? Just make sure to not over-exhaust yourself while attempting to go through his workout routine, especially if you are a newbie. While following his workout plan, you also need to ensure that your diet game is on point. Provide your body with all the nutrients that it needs for recuperation and growth along with making provisions for rest as well and you will surely get a physique just like that of Jungkook in a couple of months.