The most astonishing thing about Herschel Walker is that he is muscular and brawny as a tiger but at the same time moves as fast as a cheetah. Now before you start assuming that Herschel must be able to bench 500 pounds, let us tell you that his muscular physique is a result of bodyweight training which he prefers performing for an insane number of reps.

Herschel Walker had always been interested in sports. He played basketball until 7th grade, performed track and field in the 8th grade, and began playing football when he was in the 9th grade. Along with these, he also used to continue with his workout routine that consisted of bodyweight movements. Later on, he went on to play sixteen sessions of professional football.

Apart from being a great footballer, Herschel Walker is also a phenomenal martial artist. You would have surely got an idea about his exceptional fighting skills when he beats down his opponents in the ring. He holds a 5th degree black belt in Taekwondo. Because of his martial art skills, he found himself competent enough to try his hand at MMA. He won two bouts in which he participated and won both of them by TKO.

Herschel Walker claims that his MMA training aided him in maintaining a better shape even at 50 years of age. He further states that his current physical condition is better than it was in his early 20s when he used to play football. The most surprising thing about his current training program is that he still sticks to his exercise routine that includes training only with one’s own body weight. That means no gym, no fancy equipment, and no complex exercises. Let’s have a detailed overview of his athletic workout routine.

Herschel Walker’s workout program does not involve endless sessions in the gym. His exercise routine does not consist of working with super heavyweights. Rather, Herschel tends to keep things simple but effective. Herschel Walker workout routine primarily includes bodyweight movements like push-ups, parallel bar dips, chin-ups, pull-ups, lunges, etc. He swears by the effectiveness of these bodyweight movements. He claims that performing these movements work on enhancing muscle and core strength along with improving one’s athleticism.

Herschel Walker’s workout plan involves performing the bodyweight movements with an insanely high number of reps and that too every single day. Don’t you think the concept of nuclei overload was already known to Walker even before it became popular?

Herschel has always included running and sprinting in his workout plan. He says that running is one of the most important skills of any athlete and therefore it must be a crucial part of any athlete’s training program.

Herschel Walker‘s dedication towards his workout program is simply unmatchable. He claims that he has never missed a single workout in decades. Herschel Walker’s physique is an outcome of his consistency and dedication.

The main chunk of Herschel Walker’s training program consists of performing bodyweight movements for a fairly high number of reps. Herschel Walker also says that performing the same exercises, again and again, will eventually make your body hit a plateau. Hence, he further suggests that every athlete should include variety in his/her workout routine. This will provide the body with the change that it needs for growth.

Herschel Walker still follows the same workout routine that he followed as a teenager. Being from a poor background, he couldn’t afford expensive training equipment. Yet he made sure to train with nothing but his bodyweight. Herschel Walker’s weight training begins with the bodyweight workouts that he used to perform in his house and farm. He continued with the bodyweight workouts that provided him with both muscle strength and muscle endurance. It also worked on improving his overall athleticism.

The following table presented before you mention all the exercises that Herschel Walker included in his workout routine. 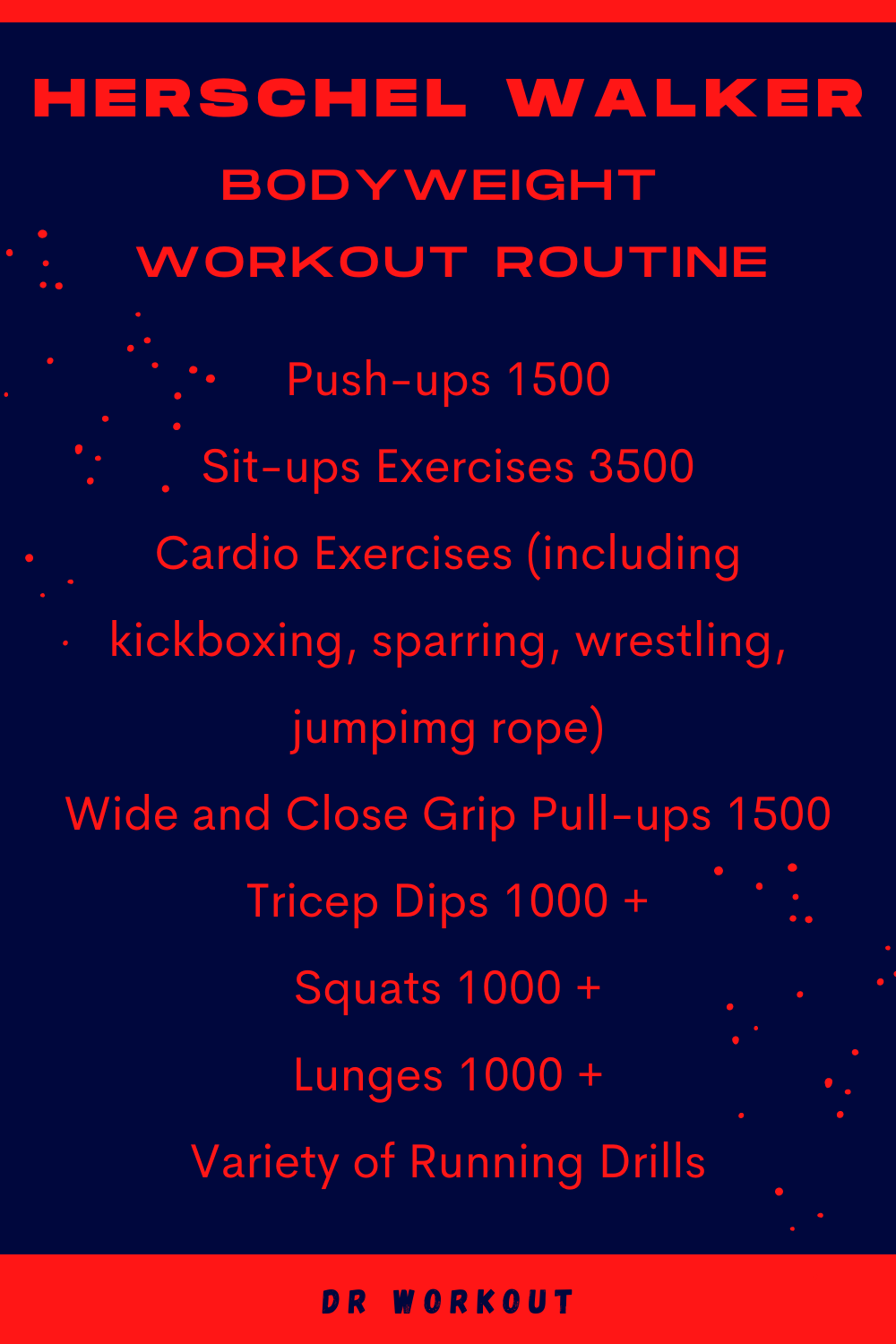 Herschel Walker is of the opinion that simple workouts can provide an individual with greater results as compared to complicated workouts. One needs to make sure to be consistent and committed to one’s training program and the results will surely exceed one’s expectations.

How many push-ups and sit-ups does Herschel Walker do in a day?

Herschel Walker does 1500 push-ups a day. In the initial phases of his training, he used to do more push-ups. But when he came into the field of MMA, he reduced that number.

How did Herschel Walker get so big?

Herschel Walker’s workout routine is completely unique in itself. Without the use of fancy gym equipment, he has been able to create a physique that is strong, muscular, and athletic. His training program can inspire many people to put aside excuses and utilize all the resources at their disposal. The results will take care of themselves.

You must have also noticed that his training program consists of exercises most of which can be done by anyone. All you need to be careful about is not attempt hitting those exercises with an insanely high number of reps like Herschel. It will burn you out in no time and may also incur injuries. Just make gradual progressions and it will work perfectly fine for you.