Gigi Hadid has a physique that can make many go gaga or rather we should say go GIGI over it. Pun intended. This well-known American model who has been on the cover page of Vogue numerous times has a well-structured workout routine that keeps her in shape all the time.

Standing tall at 178.5 cm and weighing around 119 lbs, Gigi Hadid’s impeccable physique has been subject to both admiration and envy. Getting a physique like her could be challenging but not impossible. And we know very well that you are reading this post with the intent to get a physique like that of Gigi. Ain’t it?

So let’s plunge into Gigi Hadid’s workout routine to know about the exercises that make her look like a Greek goddess all the time.

Aspiring to attain a body like that of Gigi Hadid is easy but working to attain it could be pretty challenging. This is because Gigi is a hardcore fitness freak and her intense workout routine can give some of us muscle soreness like never before. Nevertheless, it is pretty effective and if you follow it religiously, you would surely be transforming your physique into a lean and mean machine.

Gigi Hadid’s workout plan includes a variety of exercising disciplines that work on different aspects of her physique. Some of her most preferred exercising disciplines are boxing, running, resistance training, and yoga. In the following section, we will be delineating the exercise routine that keeps Hadid in great shape throughout the year.

Being a renowned American model, Gigi has to ensure that she is in great shape all the time. But her idea of fitness is not just limited to looking appealing. Her workout routine is designed in a manner that also trains her to perform better. Let’s have a descriptive look at her training routine:-

While most of us simply prefer to skip our workout routine in absence of training equipment, that is certainly not the case with Gigi Hadid. If she is traveling and doesn’t have access to exercising equipment, she relies on performing bodyweight exercises. The details about her equipment free training routine are given in the following table:- 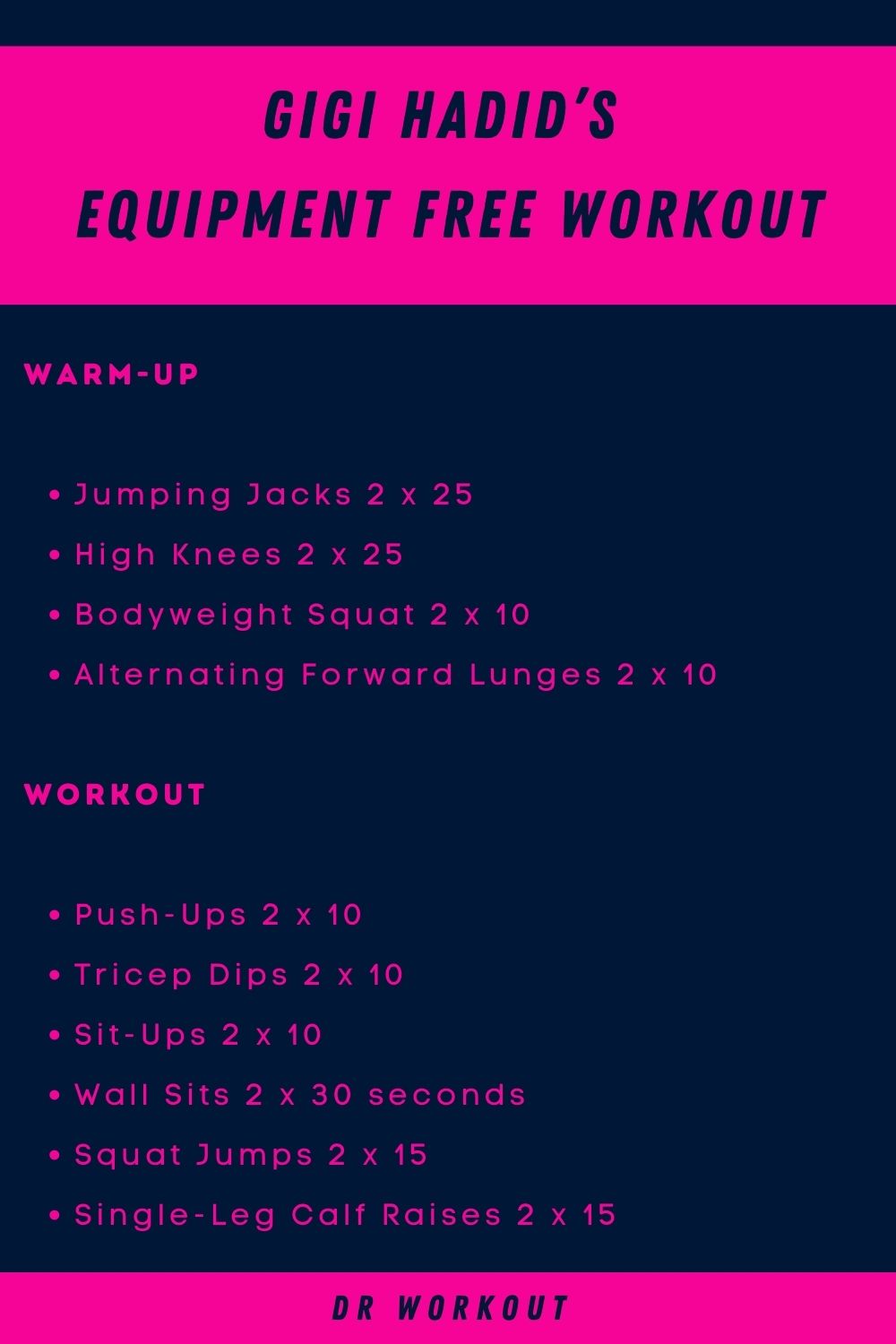 So if you too have a quite busy schedule and you can’t take out time to hit the gym, the above-mentioned workout routine can serve you perfectly. To perform it, all you need is just some space and a will to transform your physique.

The most notable part of Gigi Hadid’s physique is her well-shaped lower body muscles. Her perfectly developed quads and glutes make her appear like a fitness goddess. To target her lower body muscles, she sweats it out in her training session with the following exercises:-

Training your lower body muscles is of utmost importance when it comes to building a lean and aesthetic physique. Your leg muscles are the strongest muscle groups in your body and training them well not only develops your physique proportionately but also contributes towards boosting your athletic performance.

Gigi just loves to wear her crop tops and when she wears them she ensures that her abs are on display. Her defined and ripped abdominal area is simply spellbinding. To sport her washboard abs 24×7, she goes through a well-structured ab-workout routine. The details about it are given in the following table:- 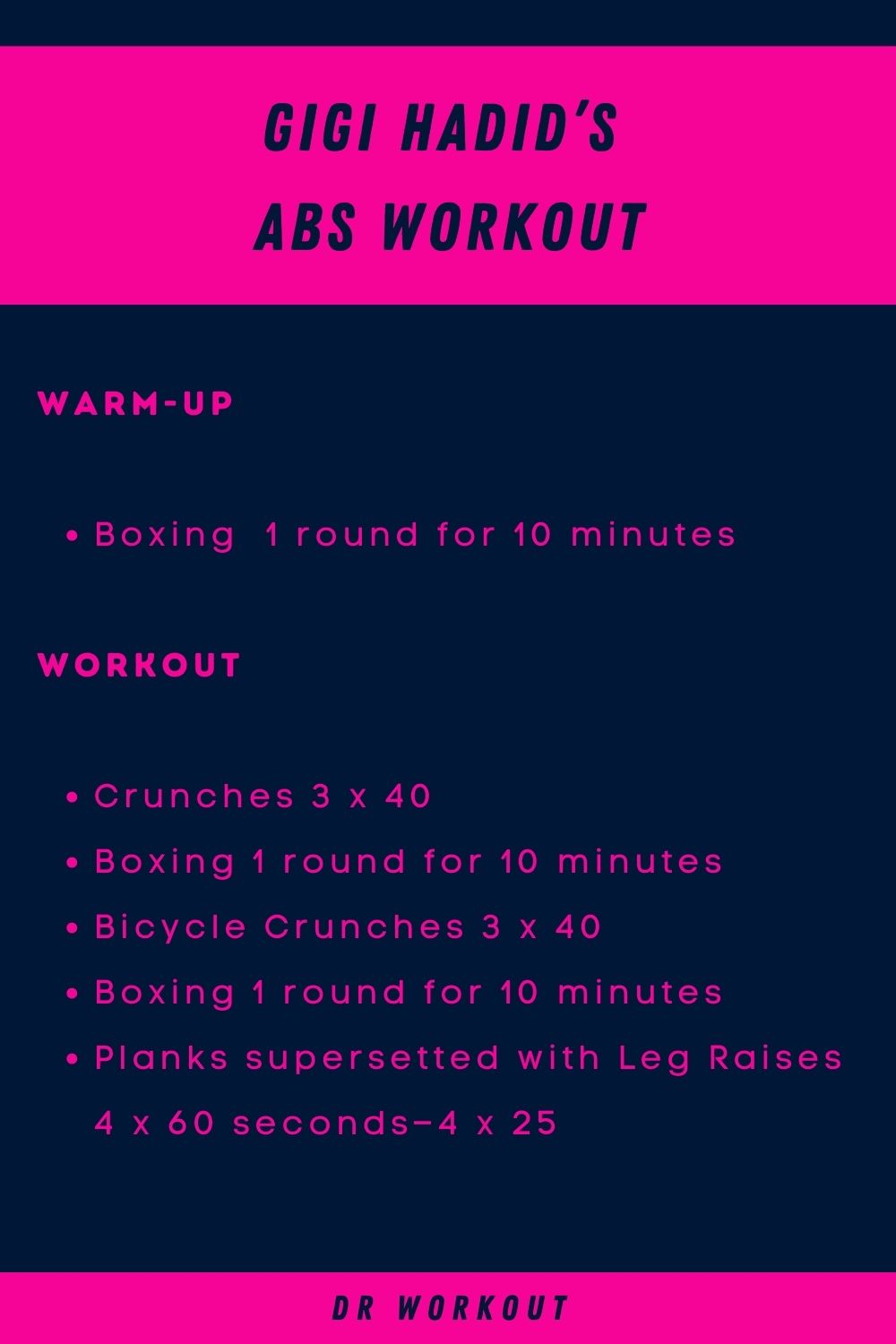 If you want to build a ripped and defined midsection, training your abs with direct core training exercises becomes imperative. Performing those exercises not only helps your midsection in attaining the typical 6 or 8-packs look but it also works on enhancing your core strength. Enhanced core strength translates into an improved physical performance which further takes your fitness levels to newer heights.

Boxing has always been Gigi’s all-time favorite exercise. She claims that boxing allows her to target her entire body in a single training session. Along with toning up her core and arms, it also works on enhancing her overall agility and speed. It also serves as a great cardio option.

Yoga is one of the oldest exercising disciplines that work on improving both physical and mental health. Gigi performs yoga regularly to ensure that her emotional quotient is on point. Doing so helps her in maintaining her peace of mind along with offering her body numerous benefits.

On days when she doesn’t feel like boxing, she opts to run. But instead of running on a treadmill, she prefers to run in open spaces. Running helps Gigi to burn off excess fat along with improving her endurance levels.

Gigi Hadid’s body exudes a certain kind of grace which can be easily spotted in her ramp walks. The credit of this goes to Hadid’s trainer who includes ‘ballet-inspired floor exercises’ into her workout routine. She occasionally goes for ballet classes that not only make her gait graceful but also work on the flexibility of her physique.

In order to make her multifaceted workout program more effective, Gigi incorporates the following tips and techniques into it. They are:-

Taking out time for exercising

No matter how hectic Hadid’s daily schedule is, she ensures to take out time for exercising. She claims that working out not only keeps her in great shape but also uplifts her mood and keeps her energetic and active.

Mental fitness is as important as physical fitness

Gigi Hadid’s training routine is not just confined to performing the exercises that aid in maintaining her gorgeous figure. For her, working on mental fitness is equally important. And to serve that purpose well she relies on performing yoga and meditation.

Variety is the key

Gigi always ensures to bring variety to her workouts regularly. This keeps her workout regime interesting and exciting. No matter how effective your workout plan is, its effectiveness will decrease in the long run. This happens because your body gets used to a specific training protocol. When you incorporate variety into it, your body works to adapt itself accordingly which translates into growth.

So that was all about Gigi Hadid’s workout plan. Her workout plan is indeed an exciting one but if you intend to follow it you would have to be consistent with it.

To ensure you don’t overtrain or undertrain yourself, you can take the assistance of an experienced trainer while following her training program. This will allow you to keep yourself away from probable injuries and will get you the most out of your training sessions.