Dwayne Johnson aka ‘The Rock’ is a huge name in the fitness industry and Hollywood. This former successful wrestler is now turning every rock on his path with his thriving entertainment career.

His zeal for wrestling runs in his blood as his father was also a renowned professional wrestler. Be it sending chills in the opponent’s spine in the ring, to power pack performance on the movie platform, he is seriously a rockstar. The Rock Johnson was the highest-paid actor in 2020.

Being an athlete, he keeps a tight watch on his bodybuilding meal plan. Let’s go through what all it takes to fuel this legend. 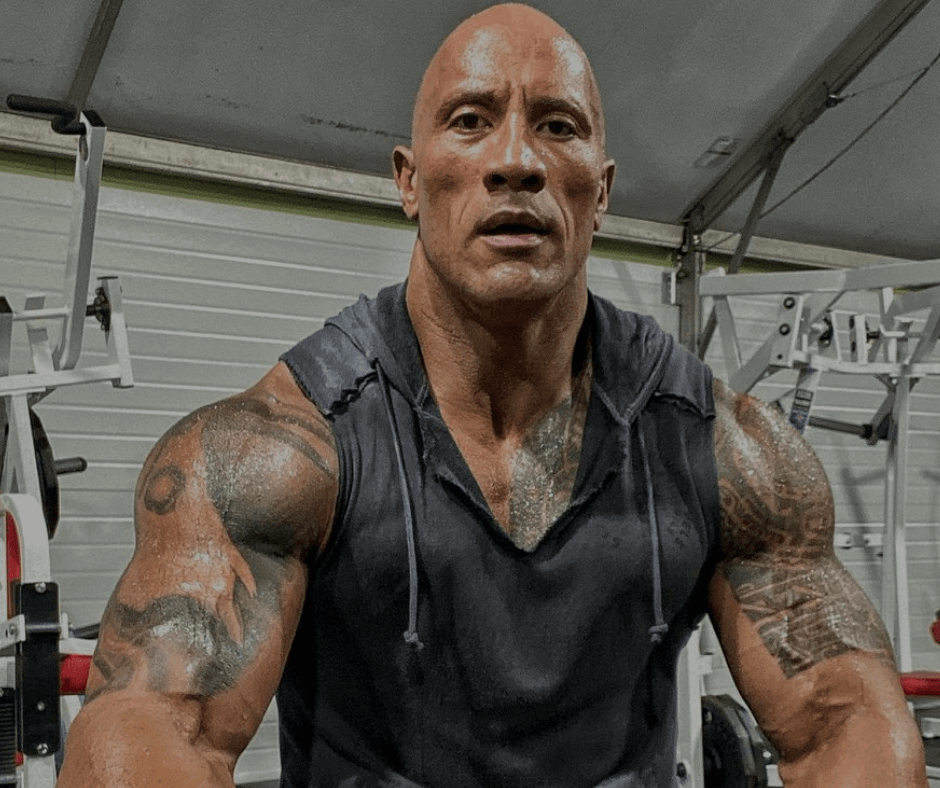 Dwayne Johnson carries a ‘go big or go home’ attitude. Be it his diet chart or his fitness regime, he follows it wholeheartedly.

Rock follows a not-so-rigid kind of diet plan. One is a 5 meal plan which he goes through every day and the other is a 7 meal plan, when he is in that mass-building mindset (for a specific movie character).

Following is The Rock’s daily diet Plan which he endures: 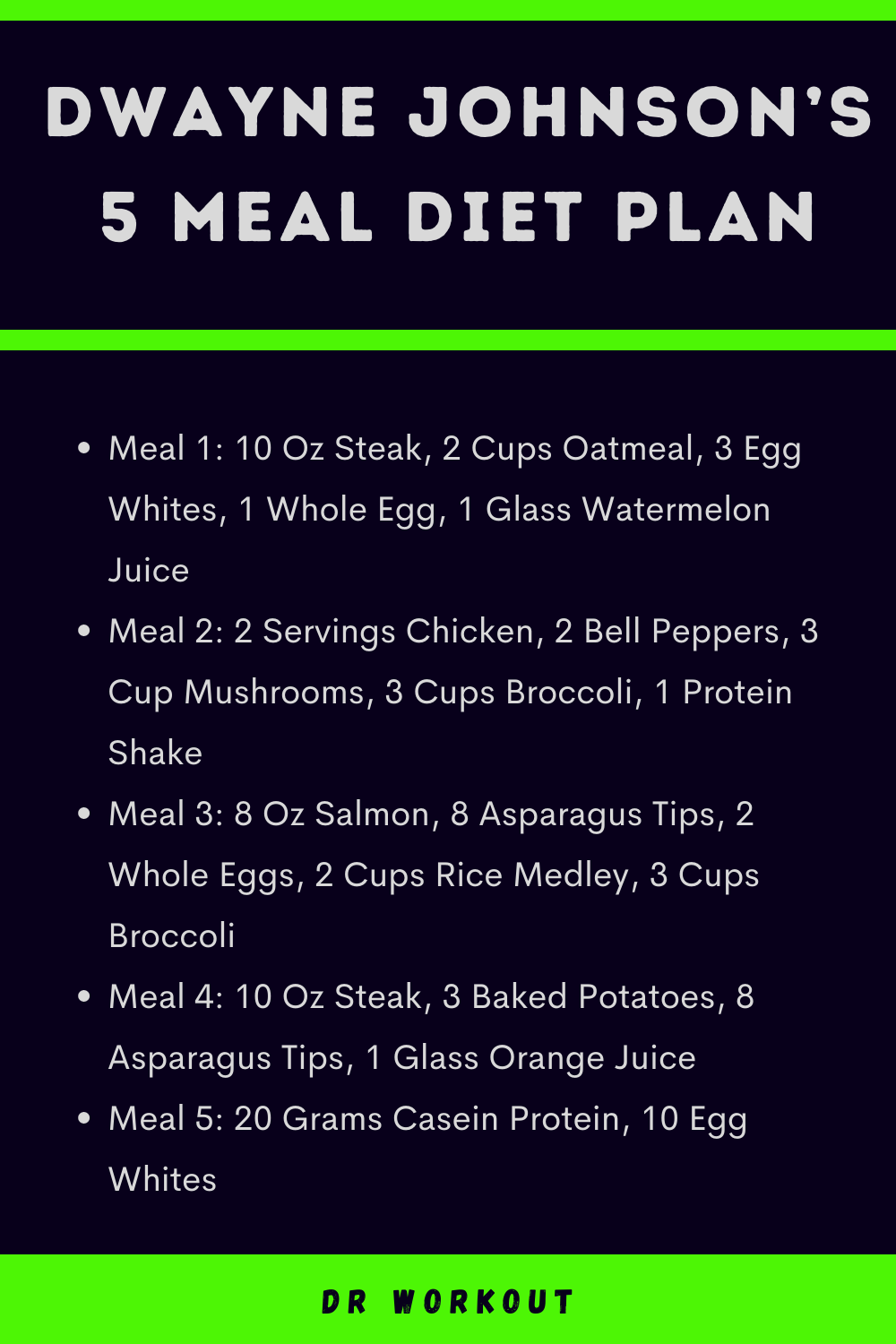 ‘Protein, protein, and more protein’, Dwayne Johnson’s diet plan is screaming its lungs out. Having steak, fish, eggs,  veggies, and whole grains keeps him and his fitness zeal running. His requirement for calorie intake per day is 5165, double what an average guy eats. This is when he is not into intense training programs.

As we mentioned when he is packing up muscle mass for some specific role he’ll be eating like a real monster. Going to the extremes, Rock would increase his meals from 5 to 7 per day. 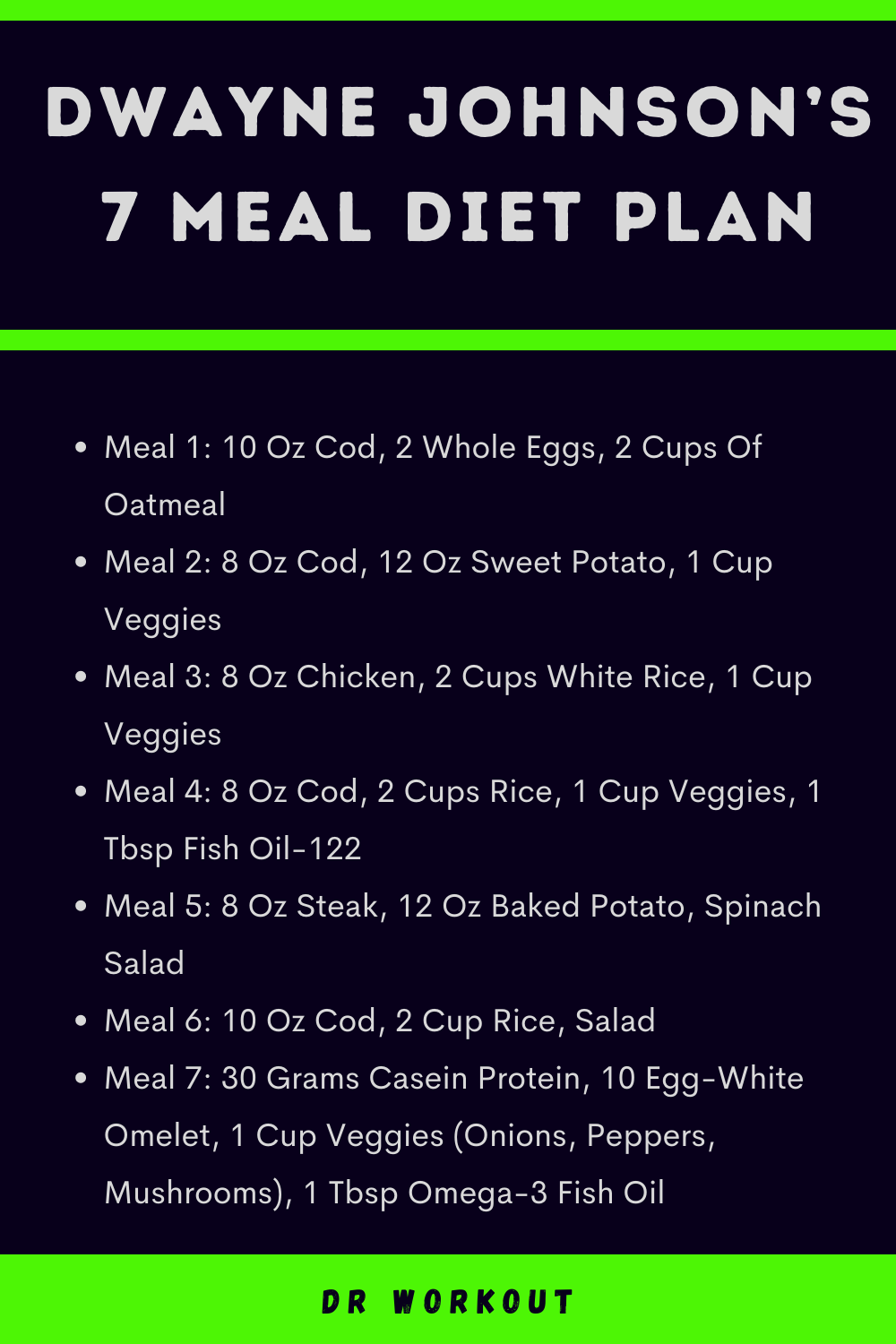 So in nutshell, it’s about how to include protein in all sorts of ways in his diet.  Dwayne Johnson’s meal plan is undoubtedly a clean meal feast and balanced nutrition plan.

The Rock Johnson is a legend in all forms. A successful athlete and now a celebrity, he is ruling every arena. 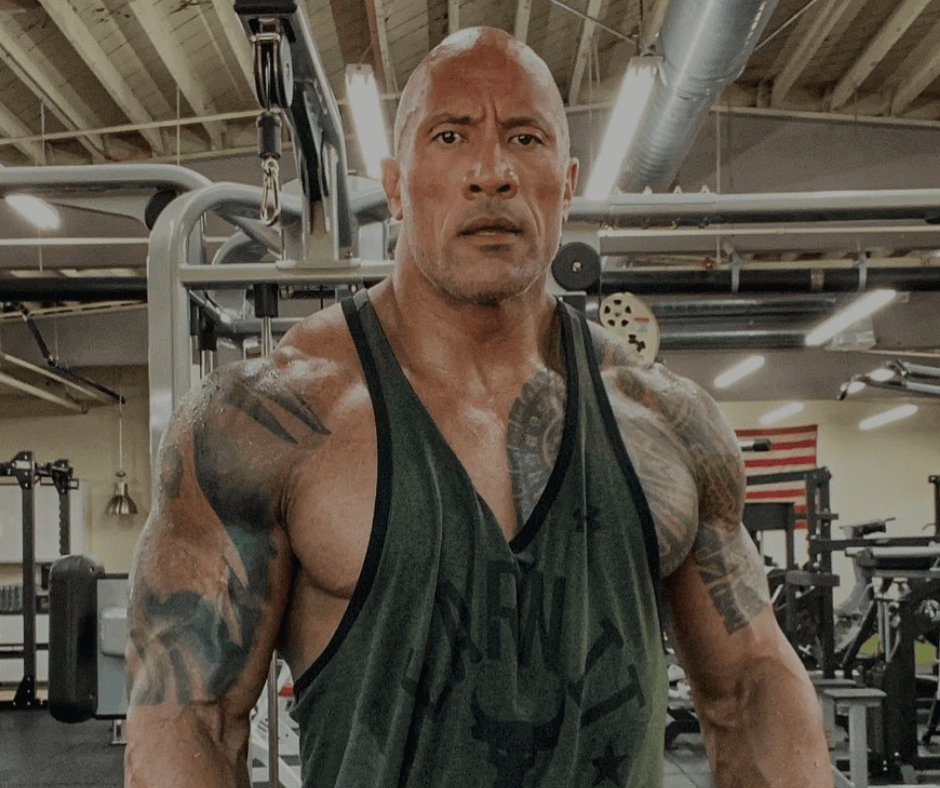 Dwayne is very open about his meals but when it comes to disclosing his supplement list he prefers to remain a bit quiet. Being a super athlete all the life he does take nutrition from supplements. Following are some of Dwayne Johnson’s supplements which he mentioned in interviews.

How many eggs does The Rock eat a day?

The Rock’s diet consists of 12 eggs, which includes egg white and whole egg as well.

The Rock prefers egg whites and includes them in his daily diet.

Does The Rock eat candy?

In a talk show in 2016, Dwayne had a candy and disclosed that this was after 27 years he ate one. So a treat like candy is a big no-no for The Rock Johnson on his regular days.

What fish does The Rock eat?

Dwayne prefers Cod in the fish category. This is rich in protein. Sometimes he consumes Salmon as well.

Does The Rock eat pizza?

Dwayne Johnson has a love for pizza, and he gobbles on it whenever he is on his cheat days.

Does The Rock eat sugar?

As we know rock stays away from sugar while he is on his clean diet. He relishes sugary treats when he is enjoying his cheat meals.

Dwayne Johnson’s diet is not for weak gut lads. You need to have a decent budget as well to spend on it. But when it comes to being like “The Rock”, we have to go that extra mile. Do you remember “can you smell, what The Rock is cooking!!!”? Now we certainly know what this superstar cooks and eats.