What a few bends in the middle can do that the straight Olympic barbell can’t? Well, it enables you to perform curls with comparatively heavier weights without risking writs injuries.

Your wrist position is more comfortable and natural on the EZ bar than the straight bar. Thus, effective use of the EZ curls bar can help you grow your arms bigger faster than many alternatives.

It is called an EZ curl bar or just curl bar and it is named so cause most of the users use it to perform bicep curls and nothing else. Not many people know that this joint-friendly curl bar can be used to perform many exercises targeting different muscle groups.

If you are looking to get more out of the curl bar at your home gym keep on reading. We have picked and explained everything you need to know about the top fifteen curling bar exercises you can add to your workout regime. 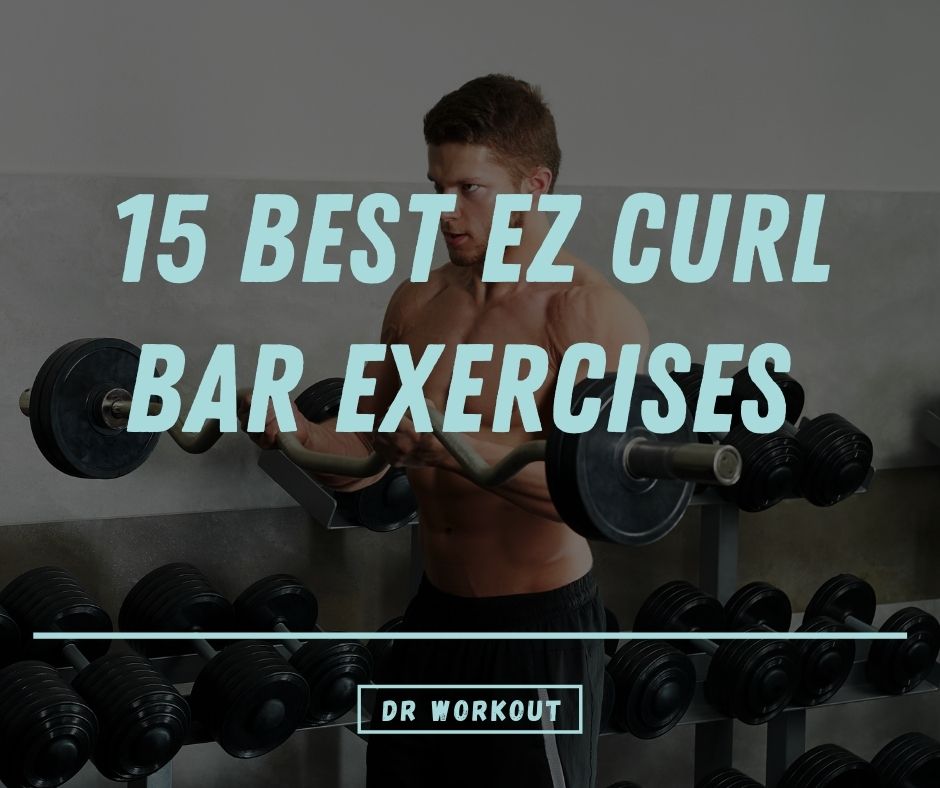 Unlike the straight Olympic bars, EZ curl bars come in different angles of handles and sizes. The most common being the 4 and a half feet bar with rotating 2-inch sleeves that accommodate Olympic weight plates.

With different semi-supinated grips, EZ bars offer a safer curling bar exercises as alternative to almost all the exercises that can be performed with straight bars. Here you can find the top 15 picks of such EZ bar exercises.

The EZ curl bar was originally designed for performing bicep curls with better wrist positions. Even today, it is the most common curl bar exercise.

Performing bicep curls with an EZ bar instead of a straight bar allows you to hold the bar with your wrist in a more natural, semi-supinated position, thereby imparting much lower stress on the wrists. It also reduces the risk of issues like tennis elbow.

Being in a more comfortable position while performing the curls lets you lift heavier as compared to a straight bar without risking any injury, and in turn, accelerates the results.

You can include variations like close grip, medium grip, wide grip in your routine to target the long and short head of bicep brachii. You can also utilize overhand grip variation to involve more of the forearm muscles.

Skull crusher is one of the best curl bar exercises for triceps. Performing these lying tricep extensions or skull crushers with curl bar using close grip activates all three heads of triceps to the highest degree.

With a little more focus on the lateral head, the skull crushers work on the whole triceps plus the elbow and shoulder stabilizer muscles better than any other tricep exercise. One must include skull crushers in their curl bar workouts for strengthening the arms and improving the muscle mass.

Many EZ curl bar exercises are variations of the standard bicep curls intended to focus on different muscles. The EZ bar drag curl is one such variation.

Drag curls focus better on bicep and tricep muscles reducing the role of forearms and shoulders in performing the curls. You would feel better bicep contraction in drag curl than standard bicep curls.

French press is one of the popular EZ bar exercises. As you stretch your arms overhead in this exercise, the focus of this move is on the long head of the tricep, though you work on all three heads in this exercise.

The overhead tricep extension provides great extension and contraction of the tricep muscles. It also involves shoulder and hip stabilizers muscles and core as you perform this curl bar exercise while standing.

The big brachioradialis muscle in your bicep that forms its shape is can be optically isolated and worked on by using a preacher curl pad and EZ curl bar. If you want that big bicep bulge, you must include preacher curls in your routine.

The range of motion and consistency of tension in the muscles you feel while performing EZ bar spider curl is unmatched by any curl bar workout. You just need an incline bench and a loaded EZ bar to perform this exercise.

The move is a bar version of dumbbell concentration curls. Spider curl isolates and works on bicep brachii and brachialis.

This is one of the few EZ curl bar exercises that are specifically designed to focus on forearms. Although the reverse or overhand grip curl exercise also works on all three heads of the bicep brachii.

Irrespective of grip width, the reverse grip curl emphasizes on forearm brachioradialis. The close grip targets the long head of the bicep, wide grip works on the short head of the bicep brachii along with forearms.

Being a compound move, it targets more than one muscle group. You work on all tricep heads, front delts, and upper pecs simultaneously while performing JM press.

It is a midway move between skull crushers and close grip bench press and hence carries the effects of both.

Due to the shape of the EZ bar, it is easier to hold it in the reverse grip for the overhead press. This move helps you improve your standard overhead press form.

The upright row is a great exercise for your upper traps and anterior and lateral delts. Use of EZ curl bar instead of straight bar involves the tricep muscles in the move.

It is suitable for all fitness levels. Doing upright rows with an EZ curl bar makes it suitable even for beginners.

This is a compound movement that focuses on the upper chest and lats but also involves the triceps and delts. One needs to add this exercise to their EZ curl bar workouts as it is easy to perfect compound move that works on strengthening upper body muscle groups and also works on stabilizing muscles.

Bent over row can be one of the EZ curl bar exercises that can be added to your bodybuildingworkout routine. It targets your whole posterior chain. With standard grip, it focuses on traps and triceps, and with the reverse grip, it emphasizes on lats and biceps.

You can incorporate both the EZ bar workouts in your schedule. You use both grips for a bent-over row with EZ bar in the same session or can use standard or reverse grip on separate sessions depending on how the schedule working out on different muscle groups.

EZ bar workouts like inclined front raise are the better way to work on the delts, traps, and lats than the standing front raise. Support of the incline bench eliminates the possibility of body swaying while performing the front raise, hence enhances the results of the exercise.

In this EZ curl bar exercise, you lift the weight of the bar using upper back and shoulder muscles. Thus, it helps you strengthen the lats, traps, and deltoids.

The 28 method curl is used and praised by bodybuilding experts. But that doesn’t mean it is just for the pros, it can be used as an effective way to build arm muscles by lifters with any level of experience.

You will be doing curls with EZ bar four sets of 7 reps each without any rest. In every set, you will change the speed or range of motion. This variation of the speed and range poses varied challenges on the muscles in a short span of time hence stimulates the muscles in a better way.

If you don’t have a preacher curl and don’t want to invest that much to buy one, we would suggest going for an arm blaster. It is arguably the best accessory that can be used to isolate biceps muscles.

The arm blaster keeps your elbows stationary, use of the EZ bar reduces pressure on the wrists, both combined provide an EZ bar workout that focuses entirely on biceps.

Almost all the straight bar exercises can be done using the EZ curl bar with better comfort and less chance of injury for the wrists. Which allows you to lift heavier and gain faster results.

The top fifteen EZ bar exercises picked in this article focus on different muscle groups in the body. Incorporate all or some of them into your workout routine and reap the benefits of this simple and versatile piece of equipment.