Christopher Michael Pratt, aka Chris Pratt, is a famous American actor. He is widely known for his performances in television and action movies. Chris Pratt garnered massive attention from his fans and other fitness freaks owing to his fat-to-fit transformation. From being a chubby star portraying Andy Dwyer’s role in ‘Parks and Recreation’ to getting into superhero shape for ‘Guardians of the Galaxy,’ Pratt lost 60 lbs of extra body weight and that too in just six months. Chris Pratt’s muscles provided him with a fit and athletic look resembling that of a superhero.

His physical transformation is inspiring to any individual who is willing to lose some pounds and get in better shape. This celebrity workout guide will provide you with the workout plan that Chris Pratt followed to bring out his superhero physique. It will also throw some light on his phenomenal work ethic that helped him in sporting a body that anyone would desire to have. Let’s get through it. 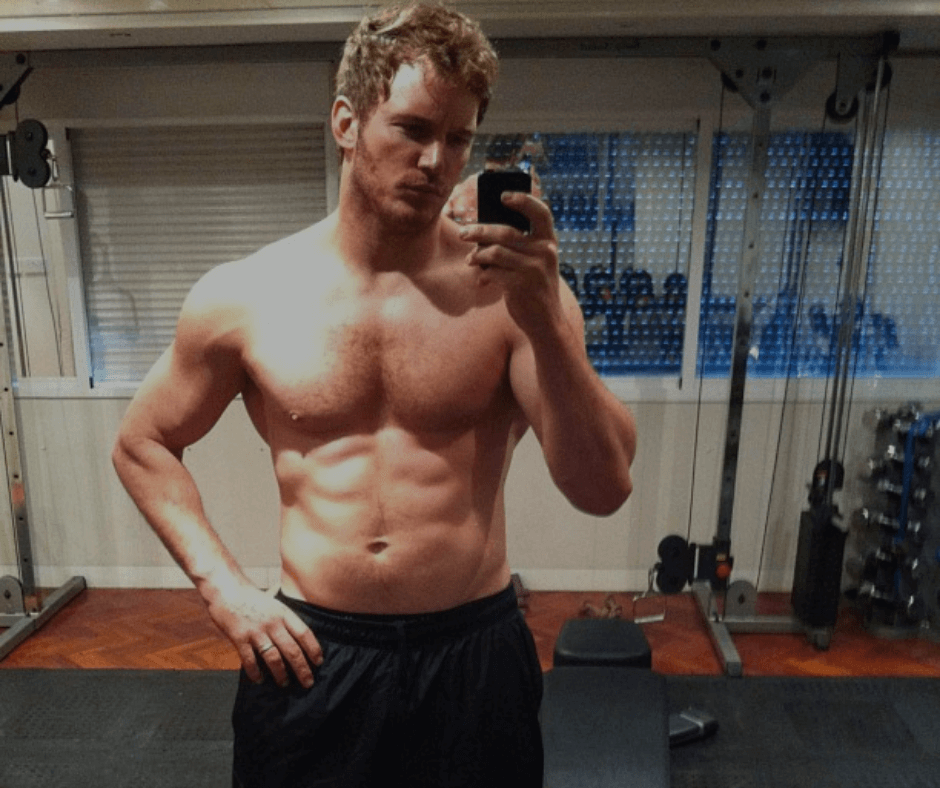 To get “superhero-fit” for his role in the 2014 American superhero film ‘Guardians of the Galaxy, Chris Pratt lost more than 60 pounds, and that too in just six months. To bring complete justice to his role, Chris wanted to be more muscular and look more fitter and leaner. He trained under Duffy Gaver, who designed an intense workout program for Chris to lose excess pounds. His workout program also aided Chris in gaining muscle size, which made him look strong and ripped.

The first two months of Chris Pratt’s workout plan were more oriented towards bodybuilding style workouts. On the contrary, the next two months included equal parts of bodybuilding and conditioning. The exercises he performed for conditioning were swimming, mountain biking, cardio circuits, treadmill, and faster-timed sessions. At times his conditioning workouts consisted of a treadmill/rowing circuit mixed with bodyweight training or weightlifting.

The picture that Chris Pratt posted on his Instagram, where he was seen sporting a ripped set of abs, was the outcome of his dedication towards his training program. Chris Pratt’s abs were a result of his hardcore exercise routine and strict diet. His trainer even claimed that Chris’s athleticism is terrific and the sincerity he shows towards his workouts is simply unmatchable. In an interview, Gaver said, “If you were to walk into the gym when he (Chris) was training, you would have thought for sure you’ve got a guy getting ready for the NFL Combine.” Now you must be getting an idea about the phenomenal work ethic of Chris Pratt.

Chris Pratt’s training program involved exercising four days a week and taking three days off. His role in the ‘Guardians of the Galaxy’demanded him to be leaner, fitter, and muscular than ever before. After all, bagging the lead role of Peter Quill, the Star-Lord was not a cakewalk at all. It demanded Pratt to acquire the physique of a superhero.

To bring more justice to his character, he went through an intense training program that involved various exercises. He used to train each muscle group once a week following a high-volume approach. Apart from his lifting sessions, he also used to work on his overall endurance and agility by incorporating a lot of cardiovascular exercises in his exercise routine.

The workout routine of Chris Pratt was focused on losing off the excess pounds along with making him more muscular and athletic. Chris used to train for four days per week. To promote active recovery and recuperation, he took three days off from his workouts.

Right from day one of his training, Chris Pratt had a clear idea of how he wants to look as the Star-Lord. Apart from training intensely, Pratt also made some changes in his eating habits. To prepare for his character, he bid farewell to all the unhealthy food items and relied primarily on nutritious foods. He even cut out alcohol from his diet to create a deficit to aid fat loss. He followed a strict diet plan that took care of his caloric intake and provided his body with all the necessary nutrients.

And that was all about Chris Pratt’s workout plan. It would indeed have inspired you to be dedicated and consistent towards achieving your fitness goals. The fat-to-fit transformation that Chris Pratt went through did not happen overnight. It took a fair share of Pratt’s time and efforts, invested for a certain period, to bring out his superhero physique. To achieve that kind of body, Pratt also needed to have the mental fortitude of a superhero.

Hence, we would recommend you to visualize the ideal physique you wish to attain, just the way Chris Pratt did. Every day, make sure to put in the effort required to achieve your desired body. We can assure you that you will be rewarded with your ideal body owing to your consistent efforts and dedication.