If you have ever been to a gym, you know that strength training is probably one of the most important components of your exercise regime, no matter what your fitness goals are.

Typically a chin up can be described as an exercise where the performer is expected to pull his body upwards, using both his hands, with palms facing inward towards your face, from a bar that is suspended overhead.

The exercise is named as so because the position of the chin, with regard to the bar is of importance here. The performer should be able to bring his chin above the level of the bar.

What Muscles Do Chin Ups Work? 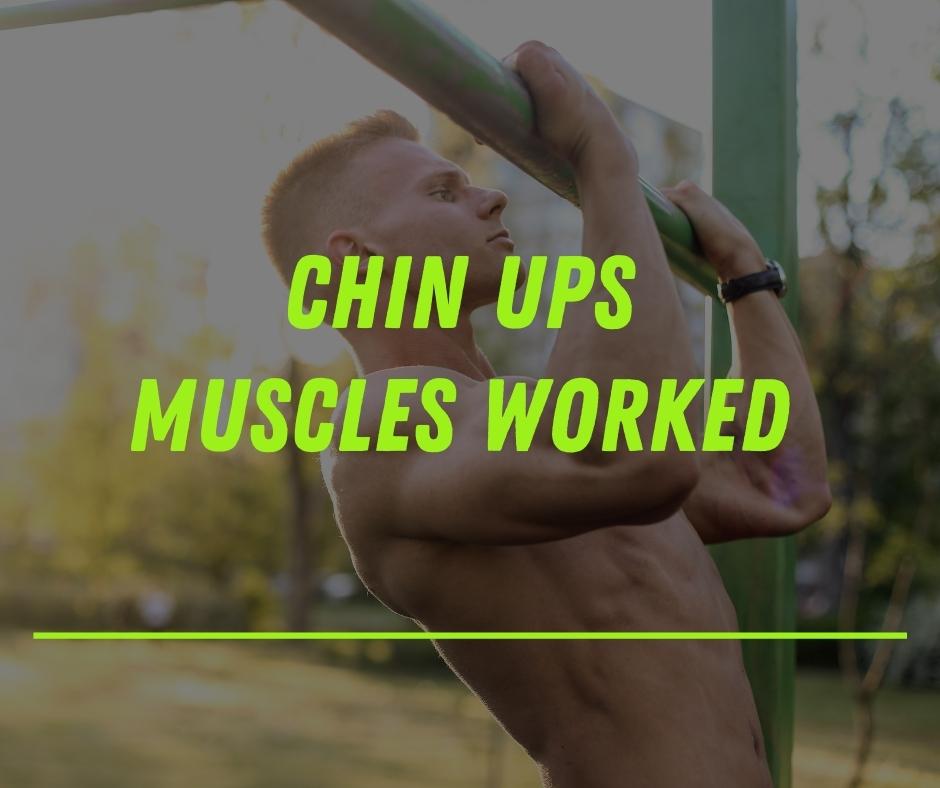 Now you might be wondering why you need to know all about the muscles that assist you to perform a chin up. The answer is pretty simple. Once you have a clear idea of the muscles that are working to help you perform this exercise, you will be in a much better position to perform an effective chin up.

Though a chin up is a great way to get into shape, it will not have the desired effect unless you perform it well. One round of correctly performed chin ups is obviously better than three that are performed using an incorrect form.

Hence, let us take a look at some of the muscles that help us perform a good chin up.

The primary function of the trapezius muscle is to provide stabilization for scapular movements. It helps in scapular elevation, neck extension and maintaining the posture of the upper body.

While performing a chin up, the trapezius works mainly to stabilize the shoulders and prevent any rotatory movements that might lead to injuries.

The pull strength and endurance strength of an athlete are greatly increased with regards to the trapezius muscle on regularly performing chin ups.

Training of the trapezius muscles is important for swimmers, baseball and basketball players and golfers. In addition, it also greatly benefits heavy weight lifters who tend to use the upper fibers of the trapezius for lifting.

If a beginner performs a chin up, he will develop more shoulder control via strengthening of the traps. This will help him in future chin ups as well, as there will be better control of the upper limb.

For advanced level weight lifters, training the trapezius will lead to the prevention of any shoulder related stress injuries during weightlifting.

The latissimus dorsi is a large flat muscle that covers the upper and middle parts of your back. Though it is not a primary muscle responsible for chin ups it is definitely one of the major muscles worked.

The latissimus dorsi, in general, will cause the adduction, extension and internal rotation of the shoulder.

When performing a chin up, the latissimus dorsi will pull your arms downwards and inwards. An easy way to engage your lats is by consciously moving your elbows towards your pelvis.

Training the latissimus dorsi will result in better control of the shoulders while performing subsequent chin ups. Also, there will be an increase in the muscle bulk of the latissimus so you might be able to see the bulge around your middle back.

Archers, shooters, Crossfit trainers and rowers are some professionals who will greatly benefit from training this muscle.

The two sections of the rhomboids muscles, which are the rhomboids major and minor are another set of muscles used to perform chin ups. This muscle provides stabilization to the shoulder complex and scapula, in everyday life.

The main action of the rhomboids major and minor during a chin up is to provide support and assistance to the latissimus dorsi muscle.

The action that they perform too is similar to that performed by the lats. They help in pulling the shoulder blades inwards and down the back. Regular practice of chin ups will strengthen the muscles around the shoulder blades, which will ultimately have a positive effect on the range of motion of the shoulder joint as well.

Chin ups improve the pull strength of the rhomboids and significantly contribute to their endurance as well.

Chin ups greatly benefit ballet performers as it helps to improve their posture and stance. It is also essential to those who practice weight lifting and horseback riding. In addition, most swimmers and divers include chin ups in their exercise regimen as well, to help with the development of the rhomboid muscle.

Teres Major is involved in the adduction of the arm and extending it from a flexed position.

During a chin up the teres major will assist the latissimus dorsi muscle and cause the arm to be pulled downwards and inwards. This action is of primary importance when raising the chin above the overhead bar.

When beginners train this muscle they will observe an increase in their pulling action, while advanced level trainers observe better shoulder mechanics even during lifting heavy loads.

As you might already know, biceps is the muscle that is placed on the front, upper part of your arm. While it obviously helps in flexion of the forearm, the biceps also allows for supination (turning arms so that your palms face upwards)

While performing a chin up, your biceps are the primary muscles engaged in load bearing. The majority of the weight is chanelled through the elbow joint into your forearms to ensure that you can perform a chin up effectively.

Chin ups improve the pull strength of biceps exponentially while also adding to its muscle mass, leading to that beautiful biceps peak that can be a cause of envy among others.

Heavy weight lifters, hockey, baseball and basketball players are some professionals who would greatly benefit from performing regular chin ups to beef up their biceps.

The abdominals are a group of muscles that are present along the trunk of your body. In the normal run, the abdominals provide structure and support to the trunk while still allowing some minor movements to occur.

It might be surprising to hear that they are one of the muscles used in chin ups, but abdominals are required to provide support to your truk while your body hangs from the bar. They give support to the torso and chest and prevent swinging or swaying of the back while lifting. Without the presence of strong abdominals, lower back injuries are more likely to occur.

Chin ups will increase the endurance of your abdominal muscles. Since the muscles are very small, you might not notice any major changes in them. However, performing regular chin ups will ultimately lead to stronger and tougher abdominals that can be palpated as well.

Kayakers, gymnasts, baseball players and footballers can benefit greatly by training their abdominal muscles. Simply including chin ups in their daily exercise regimen can also contribute positively, to their performance of the sport.

The shoulder stabilizers are muscles that are associated with the rotator cuff. As their name only suggests, their prime function is to keep your shoulders and scapula stabilized. When you perform a chin-up, you train your scapular and shoulder stabilizers as well which enable you to execute a movement that involves pulling your body vertically.

It is often believed that men find it easier to perform this exercise rather than women since their biceps and other muscles of the arms are naturally bigger than women’s. However, there is no conclusive evidence of the same.

The major takeaway here is that chin ups can improve the strength and endurance of the upper arms, while concentrating on the abdominals as well, which will result in better posture as well.

Chin ups, build strength, improve grip strength and help in body positioning as well, all of which are of immense important not only during building your physique but also during performing activities of daily living.