When it comes to social media platforms, they are performing pretty well in displaying the talent of young individuals. Charli D’Amelio is one such talented teenager who is making a prominent presence on Tik-Tok. With a fan base of 45 million followers, Charli has started to be known as “the Queen of TikTok”. Even the number of her followers is getting increased day by day owing to her popularity. She is young, beautiful, immensely talented, and a social media influencer.

Charli D’Amelio’s videos on her social media handles primarily exhibit the grace with which she dances. It would be no exaggeration to say that Charli is a born dancer. Her dance moves have acquired a massive fan base for her. She has also been competing in competitive dancing in which she performs in various dancing styles including salsa, ballroom dance, and many more. This 16-year-old girl dances like liquid electricity which simply mesmerized her audience.

In order to dance so effortlessly, Charli D’Amelio goes through a disciplined lifestyle in which she has to give time to her other workouts as well apart from dancing. In the following sections, we will be discussing Charli D’Amelio workout routine that helps her in staying fit and make her perform flawlessly.

If you are an avid fan of Charli D’Amelio, you would have surely been impressed by her fit and agile physique. After all, all the graceful dance moves that she performs in her videos will require a body that is flexible as well as athletic. Hence, she indulges in practicing various disciplines of exercising that include dance, cardio, yoga, and bodyweight movements.

These exercising disciplines prepare her body to look astonishing on one hand and enable her body to perform each dance move with great finesse and ease. Let’s have a descriptive overview of Charli D’Amelio workout routine.

The workout routine presented here is quite versatile in nature. The following workout routine has been designed considering the athleticism of Charli D’Amelio, it will help in keeping your body fit, lean and athletic.

One simply cannot deny the fact that Charli is excessively passionate about dancing. Dancing is primarily the thing which she is known for. Each of her synchronized steps and jaw-dropping moves can easily leave an impact on anyone who is watching her dance. But her dance moves that you see have been perfected through numerous dance training sessions. The perfection of her dance moves is an outcome of the dedication that she shows towards dancing.

Charli D’Amelio has even expressed her excitement for dancing when she shared a post on her Instagram handle saying how happy and excited she was to attend her dancing sessions after almost 9 months owing to lockdowns and restrictions imposed due to COVID-19.

Charli D’Amelio’s dancing sessions form the crux of her workout routine. So now you must have known about the secret of her flabbergasting dance moves. Isn’t it?

Yoga is undoubtedly one of the oldest forms of exercising discipline. Yoga not only works on your body but also works on your mind. Charli D’Amelio often uploads certain pictures on her social media handles that really talk a lot about the flexibility that this 16-year-old possesses. Apart from dancing, it can be assumed that she also includes yoga in her workout routine to some extent. It provides her body with great flexibility and athleticism that get exuded in her dance moves. Yoga can also be the reason for her beautiful and glowing skin that adds to her charm.

To provide a good workout to your cardiovascular system, you can do cardio for at least 4 days a week. 40 minutes of running followed by 20 minutes of walking, will work on your stamina on one hand and will burn off the excess calories on the other hand. You can also invest some of your time in skipping ropes as a part of your cardiovascular program. Performing regular cardiovascular exercises will aid in keeping your body light and will also help in toning. Last but not the least, a good cardio workout will also help in keeping your heart healthy.

In order to get a pretty decent level of body balance, it can be assumed that Charli D’Amelio might be including some bodyweight movements in her training program too. If you have decided to follow Charli D’Amelio workout routine, you must definitely perform some bodyweight movements. A basic 20 minute routine of bodyweight exercises that you will perform after your cardio session, will help in keeping your body lean and toned. The workout routine that has been presented below is inspired by Charli D’Amelio’s workout program.

You can include the following bodyweight movements in your workout plan:- 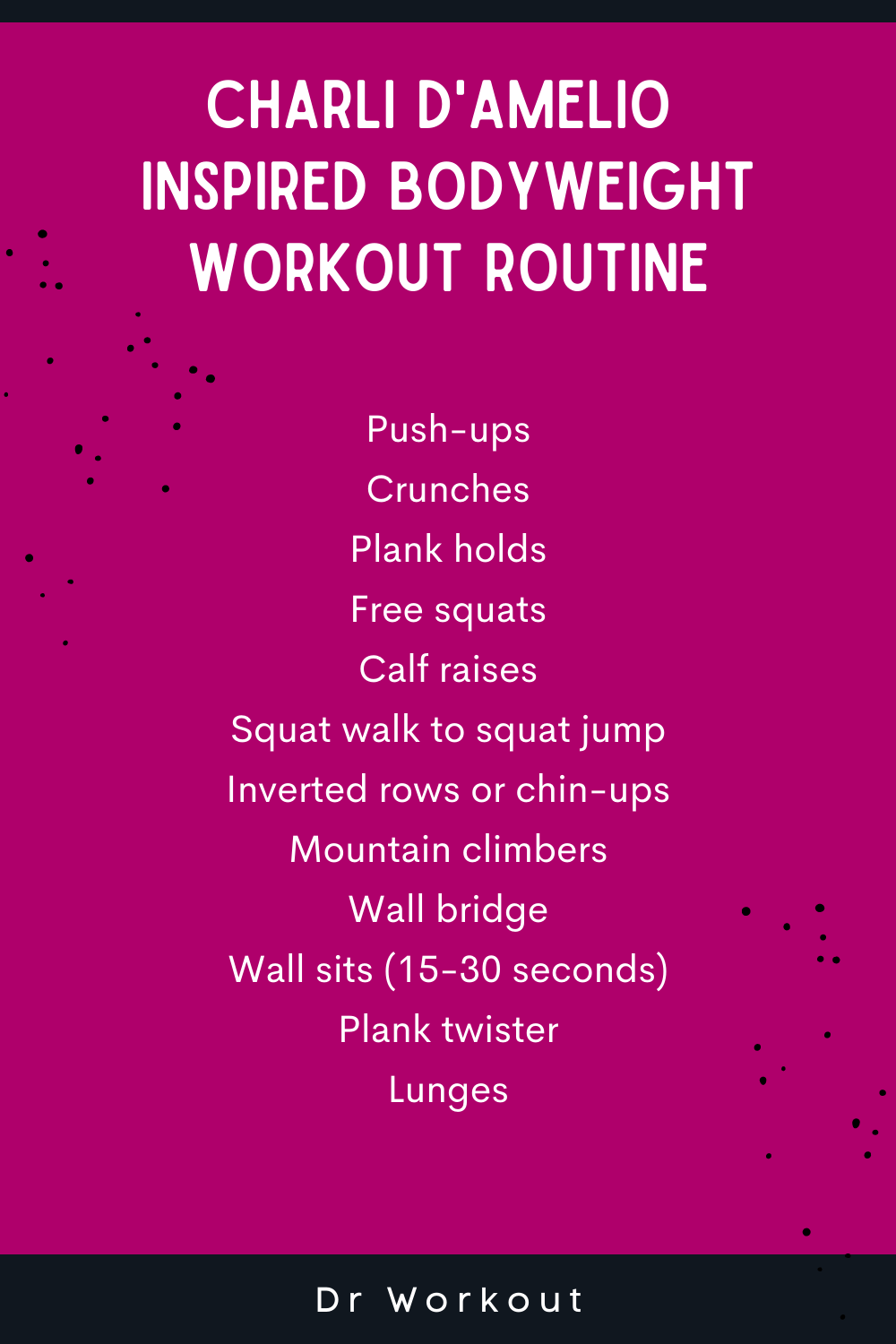 For toning your abs, we have included 3 Ab workouts in this routine. If you want intense ab workout, add lying leg raises and knee hugs to this plan.

You can perform these bodyweight movements for 3 sets of 25 reps each. You can rest for a period of 15-30 seconds between sets.

Charli D’Amelio is quite meticulous about her overall workout routine, especially dancing. Her commitment and dedication towards her craft get exhibited in her videos where she dances her heart out. She is just 16 years old but her popularity is increasing by leaps and bounds every day.

We expect that the Charli D’Amelio inspired celebrity workout routine presented here would help in providing you with a slender and lean body just like that of Charli. All you need to take care of is to also make provisions for rest and recovery so that you get the best out of this workout routine.