Bradley Martyn is one of the most renowned fitness entrepreneurs. His bodybuilding and fitness-related videos on YouTube have made him quite popular in the fitness and bodybuilding community. He also owns the Zoo Culture Gym and has been a fitness trainer as well.

Bradley was born in San Francisco. His training journey began when he was just 15 years old. When he was in his 20s, Bradley started working as a personal trainer. At that age, he also became quite active on social media. He used to post his pictures on his social media handles, especially Instagram. Later in his career, he became a bodybuilder and he went on to win the 2011 NPC Southern California Amateur Bodybuilding Championships and the 2013 NPC Phil Heath Classic.

Bradley Martyn started uploading his workout videos on YouTube in 2014. His YouTube channel garnered the attention of fitness freaks around the world who found a new fitness influencer in him. Currently, his YouTube channel has over 3 million subscribers. He often runs informational podcasts on his channel that provide the viewers with motivational content. Bradley Martyn has also trained with some world-famous big shots including Dan Bilzerian, Larry Wheels, Mike Rashid, and many others.

This bodybuilding workout guide will give you a descriptive overview of Bradley Martyn’s workout routine that has provided him with a lean and muscular physique that exudes great strength and athleticism. 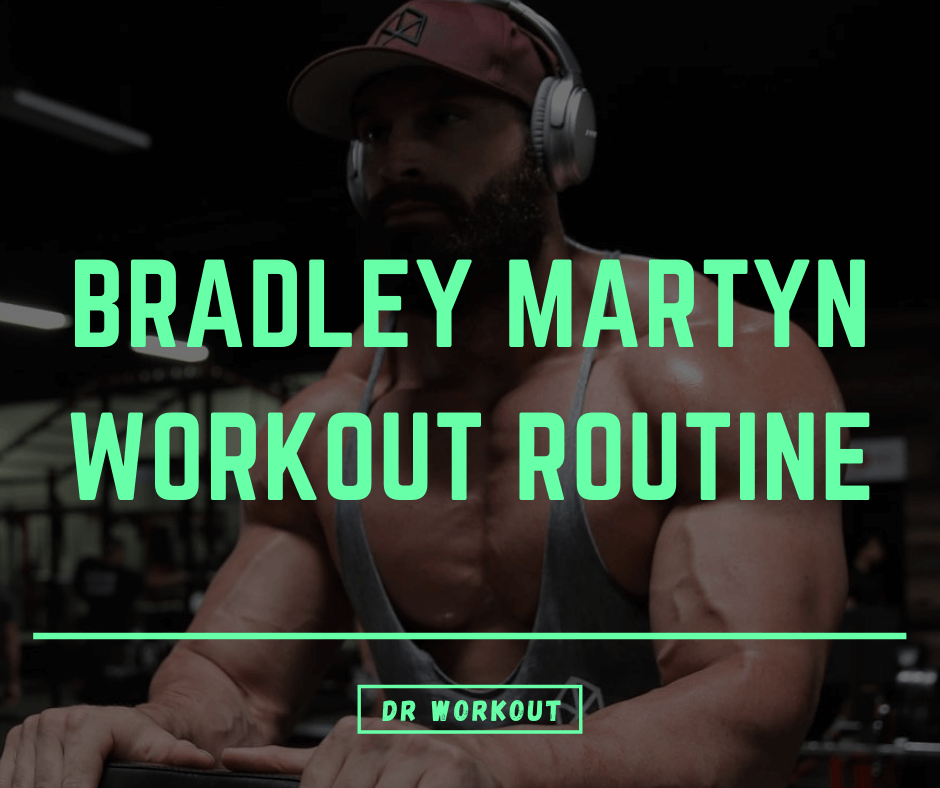 Bradley Martyn prefers to stay lean and muscular throughout the year. Currently, he doesn’t participate in competitive bodybuilding events but he is still dedicated to his workout routine and diet. Standing tall at 6 feet 3 inches, he weighs around 235-245 lbs. He follows a well-structured workout program complemented with a strict diet to maintain his muscle mass throughout the year.

When it comes to Bradley Martyn’s workout program, it does not involve super heavy lifting. Instead, Martyn prefers to train with moderate weights. He claims that he usually leans towards a weight that is 75-80% of his 1 RM. Bradley Martyn’s workout routine consists of performing 4-5 sets of each exercise and his rep range falls in the range of 8-12 reps.

Bradley Martyn’s workout plan doesn’t involve a lot of super heavy lifting. He doesn’t like the concept of being an ego lifter at all. When it comes to his training sessions, he prefers to leave his ego outside the gym. Martyn prefers to train with moderate weights. While performing any exercise his main focus is concentrating on the contraction and relaxation of the targeted muscle. He makes sure to get a full range of motion on all the exercises.

Martyn had started working out when he was just 15 years old. This made him an early adopter. Presently, he has a decent level of experience when it comes to training. He understands his body well. His workout schedule depends on how his body feels. At times, he trains only 3 times a week. Otherwise, he prefers to train 5-7 times a week.

The most highlighting part of Martyn’s physique is his arms. He has trained them hard enough to make them balloon up to 18 inches. Undoubtedly, he focuses a lot on developing his arms but at the same time, he also follows a classic workout split to work on the other muscles of the body to have a well-rounded physique.

The exercise routine of Bradley Martyn primarily focuses on bodybuilding by targeting and training specific muscle groups. He has never been concerned with lifting the most amount of weight in the gym. It simply does not serve the purpose for which he is training. Bradley Martyn’s workouts are more focused on promoting hypertrophy.

Bradley Martyn prefers to train with moderate weights. He makes sure to focus on muscle contraction during the concentric phase of any movement. He slows down during the eccentric part of the movement rather than just dropping the weight down. This helps in engaging a greater amount of muscle fibers. He includes a lot of exercises for training each of his muscles. His training program consists of both compound and isolation movements that aid in training his muscles from different angles.

How often does Bradley Martyn workout?

Being an early adopter, Bradley knows about his body and hence he does not follow a set workout program. Generally, he prefers working out five days a week. He follows a regular bro-split in which each day of the week is dedicated to training a particular muscle group. Bradley Martyn hits each muscle group once per week. At times he chooses to workout only 3-4 times in a week. This is dependent on how his body is responding and his training instincts.

Even though Bradley had seen certain tragedies in his childhood, nevertheless he went on to make a prominent place for himself in the fitness industry. His story is quite inspiring. He believes that a strong mind can overcome numerous adversities of life.

So by now, you would have surely got an idea about the workout plan of Bradley Martyn that provided him a physique from which anyone can get inspired. Martyn is not just a big dude but his physique also exudes leanness and athleticism. His eye-catching physique is an outcome of relentless hours that he dedicated to his training along with maintaining a strict diet. We expect that his workout routine will serve you in your best interests.